The EUI rowing club on the Arno, by Jasper Verhagen.

At the end of September the EUI’s rowing club will take to the water again, launching from Florence’s esteemed club on the Arno. 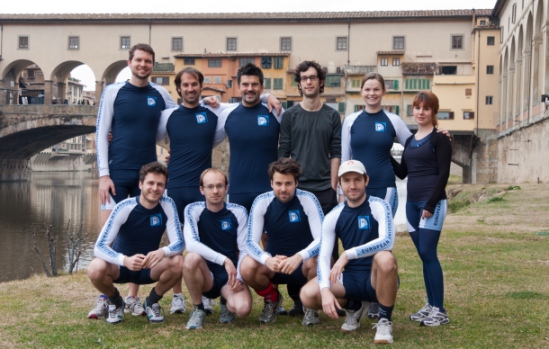 The EUI rowing club in front of the Ponte Vecchio, by Jasper Verhagen.

“It’s one of the best things about Florence, apart from the EUI,” says Sara Helene Andersen, a law researcher, “It’s something to look forward to; when the sun is up it’s wonderful to row down the river.”

Despite having never picked up an oar 12 month ago, Sara now joins around 20 rowers who meet thrice weekly for indoor and outdoor training sessions. Their home is the Società Canottieri; founded a century ago it continues to exude and air of prestige in keeping with its neighbour – the Uffizi Gallery. In addition to the boat house and gym the Società Canottieri boasts a garden bar and restaurant that look out onto the Ponte Vecchio.

While such surroundings may inspire idleness, Sara and her fellow PhD rower Marja-Liisa Laatsit are adamant that time on the river is coupled with circuit-training and gym sessions. After a try-out week, newcomers spend a couple of weeks indoors learning the technique on machines and in a small pool before hitting the water. “It takes time to get yourself stabilised,” says Marja-Liisa, “As you advance we have a big eight-boat called ‘Badia Fiesolana’ [and other sized boats]. There’s nothing to be afraid of in terms of sinking of capsizing!”

“You easily get the hang of it and quickly enjoy it,” Sara agrees, explaining that after time on the machines she bobbed about on wide boats before hitting the narrow one after seven months.

The EUI group is a mixture of genders, academic departments and rowing experience. In previous years members have visited Milan and the Netherlands for races, while this year some are looking to get a racing team together. However, the group is open to ‘champagne rowers’ too, describe by Sara as “people who just want to row for fun and enjoy the sun and row up and down the Arno enjoying the surroundings”.

There is plenty of space for both approaches; while the arches over the Arno create challenges for experienced rowers, the waterway is a far cry from the chaotic channels of Venice. “There is still a lot of space,” Marja-Liisa explains, “It’s just the rowing club and so there are maybe one or two other boats.”

Outside of training hours the group also gets together to row at the weekend, finishing off a morning on the Arno with lunch. As Marja-Liisa says: “It’s a great group activity and you get really close to people. The best thing is that it’s really social, but there’s also the possibility to do serious rowing.” Sara agrees that the club has helped expand her network, by both meeting people from other departments at the EUI and Florentines.

The rowing club currently meets at 8.00am on Mondays and Wednesdays and 7.30pm on Thursdays, for 90 minute training sessions. The introductory times and dates are to be confirmed and people are encouraged to come along even if the schedule sometimes clashes with their academic calendar.