‘There are many services which offer refuge, but very few that offer genuine integration. The EUI’s success in this area sends a very strong message.’  These were the words of His Excellency the Bishop of Fiesole Mario Meini, one of the signatories to the renewed agreement between the  EUI, Caritas and Fiesole’s Cathedral Chapter to collaborate on the hosting and integration of six refugees on the Badia premises.

EUI President Renaud Dehousse also stressed the importance of the initiative. ‘It is an exemplary programme,’ he says, ‘because it shows that something can be done. It facilitates the integration of refugees into society, and demonstrates that an open attitude has dividends.’ ‘Integration is at the heart of Europe,’ he continued, ‘and we know well how difficult it can be.’

The agreement, which was renewed on 21 April 2017 in President Dehousse’s office, has not been modified in any way, a ‘confirmation of the benefits of the project’, says Director of the Real Estate and Facility Service Kathinka España, who first proposed the idea in late 2015.  Especially gratifying, she continued, was the cross-section of volunteers involved in the initiative.  ‘The EUI itself is a laboratory, we are multicultural, and everyone has participated–researchers, fellows, faculty and staff.’ 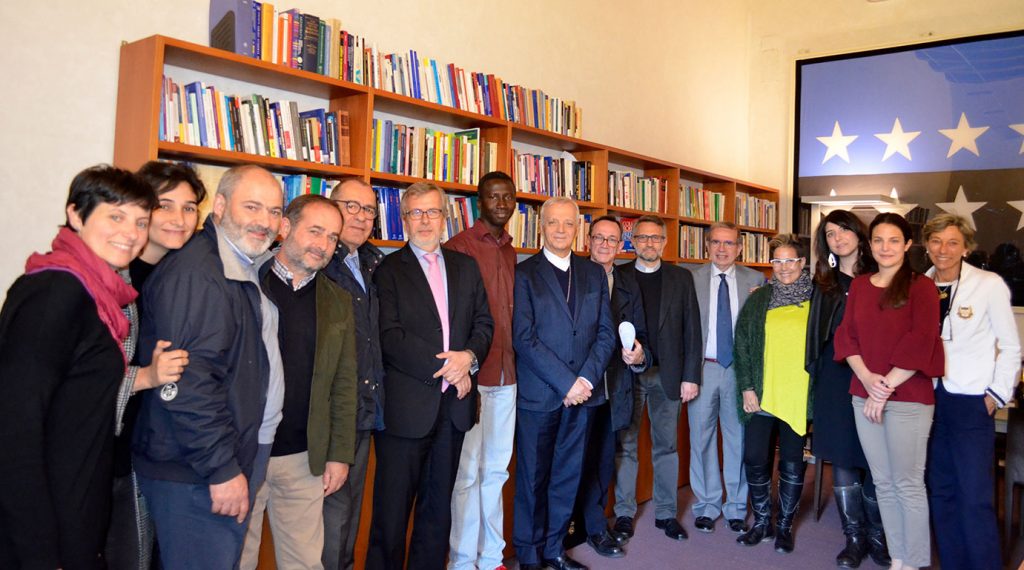 Doman, a guest of the EUI refugee initiative since its inception, was also present for the signing. Doman arrived in Italy from the Ivory Coast after a long and fraught journey through Ghana, Burkina Faso, Niger, Algeria, and finally Libya.  As Alessandro Martini, Director of Caritas Diocesana warmly congratulated him, Doman had a double reason for celebrating the renewal of the agreement: the refugee was awarded his permit of stay four days earlier on 18 April.

As volunteer Eleonora Milazzo explained, the EUI supports Doman and the other five guests at the Badia while they are seeking international protection.  “We support them during their application process and while they wait for an interview’, she said.  ‘We start the integration process.’

Of the original six guests, four have received permits of stay, most recently Doman.  While three have left the Badia, they continue to be in touch with volunteers.

The Refugee Initiative will be presented in a special session on 4 May of this year’s ‘State of the Union’ conference, explains coordinator Caterina Guidi.  ‘We will present how the initiative works and the outcomes–what we have gained after one year.’  The session will be attended by MEPs, policy makers, and other interested individuals.  ‘We hope to stimulate reflection at the political level’, she says.  Then, echoing the words of so many people involved in the project, she expressed her hopes that ‘we can be considered as an example that other organisations can follow. I don’t know of any other university institution that has literally opened its doors to refugees.’

The EUI refugee initiative: one year on