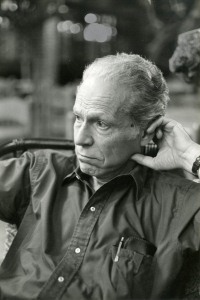 Albert Hirschman, a celebrated economist who also spent time as a soldier, an interpreter and an insurgent, died on 10 December at the age of 97. He was presented with a EUI degree honoris causa in 2002.

Hirschman’s early interest in economics took him from Berlin, where he was born on 7 April 1915, to Paris, London and Trieste. His academic career was sidelined while Hirschman went to Spain to fight in the civil war, later joining the French army at the early stages of World War II. Before fleeing crumbling Europe for a fellowship at University of California, Berkeley, Hirschman played an instrumental role in helping refugees cross from France into Spain.

His wartime days were however not over; the economist went to Italy and North Africa with the US army, later working as an interpreter in post-war criminal trials. With the war over, Hirschman returned to the US to work for the Federal Reserve Board.

He moved to Colombia in 1952 to work as an economic advisor, before launching his academic career back in the US. During the following 60 years Hirschman held positions at Columbia, Harvard, Yale and the Institute for Advanced Study in Princeton, where he was appointed professor of social sciences in 1974 and professor emeritus in 1985.

His distinguished publications include ‘The Strategy of Economic Development’ in 1958; the 1970 text, ‘Exit, Voice, and Loyalty: Responses to Decline in Firms, Organizations, and States’; and ‘The Rhetoric of Reaction: Perversity, Futility, Jeopardy’, published in 1991.