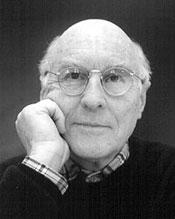 It is with great sadness that we announce the death of our colleague and friend Professor Alessandro De Giovanni Pizzorno on the 4th of April 2019, at the age of 95.

Professor Pizzorno worked at the EUI as a full-time professor at the Department of Political and Social Sciences from 1986 to 1994, and was nominated Emeritus Professor of the EUI from 2005 to 2017. After his retirement as Emeritus Professor, he was a Professorial Fellow in the SPS Department until his death.

He joined the EUI faculty in 1986 as Professor of Social Theory. It was the beginning of more than 30 years of service to the EUI community as a scholar, colleague, and friend. His student and later colleague, former EUI Professor Donatella della Porta, shared her memories of Professor Pizzorno:

“Sandro contributed deeply to both important theorizing and empirical analyses while in Fiesole, in particular on processes of identification and recognition. From a personal point of view, I had the incredible fortune of having him both as a teacher and a friend, for many years: first as his research assistant in my ‘first’ life at the EUI, and then later as a colleague.  With Sandro I started learning by doing—doing in-depth interviews together, discussing at seminars and lunches, visiting his office for a chat, exchanging short notes during the many talks that he assiduously (and critically) attended.

If I had to mention only one of his many admirable qualities, I would say that for which he was most known (and loved): his capacity to listen to all, to learn from you but also to help you not only with the right answers, but with the right questions.

Sandro’s mentoring, his work, his career were all based on the broadest and deepest cosmopolitan culture and on a firm commitment to fight for a better world.  For his extraordinary intellectual but also human contributions—a giant in social theory but also a mensch—he will be dearly missed by many of us.”

Professor Colin Crouch, former Chair of the SPS Department at EUI and long-time colleague of Professor Pizzorno’s, also shared his memories of Alessandro:

“I am indebted more to Sandro Pizzorno than to anyone else for my own intellectual development. It started when he came to Nuffield College, Oxford, in 1973 and recruited me as assistant for the project that resulted in our two edited volumes The Resurgence of Class Conflict in Western Europe since 1968. He introduced me to the then small but vibrant world of researchers on European industrial relations among whom I was to work across the following decades. When I assembled our papers for publication I wrote our names as Pizzorno and Crouch. He was a very well established scholar and I was just starting in academic life. It was typical of Sandro, and unlike many of his contemporaries, that he insisted: No, we must have alphabetical order.

When I came to the EUI in 1995 Sandro had just completed his time as professor, but lived locally and was often working at the Badia. Lunch with him in the mensa was always a joy – great fun and warm humour, combined with extraordinary intellectual stimulation. His knowledge was enormous, and his sociological analysis had all the rigour and elegance of rational choice theory but entirely without its rigidity and narrowness.

Sandro once told me that he would be happy to be measured by a citation index, provided the number of citations was divided by the number of words an author had written. His written output was not vast, but that is because one sentence from him was worth many pages from the rest of us: precise, beautifully formed, and brimming with the power of his insight and the rich depth of his knowledge.”

The Institute expresses its sincerest condolences to Professor Pizzorno’s family. He is survived by his wife Patrizia, a medieval literature scholar and faculty member at the University of Siena.