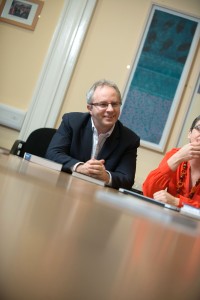 Professor Rory O’Connell, who received his Ph.D. in Law at the EUI in 1997, writes to EUI Life from the Department of Law at Ulster University, where he is Director of the Transitional Justice Institute.

He reports that Law at Ulster University has produced an outstanding performance in the UK’s REF 2014. It was ranked fourth in UK for research overall and first for impact.

According to Professor O’Connell “The EUI experience was a crucial formative one both intellectually and personally; its commitment to an international, multicultural, multidisciplinary research centre inspired by diverse and rich theoretical frameworks provided intellectual inspiration; while the opportunities for social interaction created life-long friendships. I am always delighted when an opportunity to collaborate with EUI alumni appears.”

Rory is not the only EUI alumni at Ulster; Dr Eugene McNamee, Head of the Law School since January 2013, defended his thesis in LAW in 2001. He told EUI Life that they were all “delighted with the result and eager to continue growing through reaching out to international institutions such as  the EUI, which obviously has a special place in the affections of both myself and Rory.  I would encourage any EUI researcher, past or present, to check our specialist post-graduate programmes, and our opportunities for visiting scholars – and to keep an eye open for employment opportunities.”

In turn, EUI alumni Mark Bell is now Regius Professor at Trinity College Dublin and was one of Ulster’s first Law graduates.