Professor Michaël Tatham (SPS 2006-2010) has been awarded the 2017 Best Book Prize from the academic association for Contemporary European Studies (UACES) for his work With, Without, or Against the State? How European regions play the Brussels game. The award, which Professor Tatham accepted in Krakow earlier this month, is awarded each year to the book that has made the most significant contribution to knowledge in the area of contemporary European studies.

The book, which the judges lauded for its “impeccable comparative logic”, examines the way in which sub-state entities – the devolved administrations in the UK, for example – interact with the nation-states to which they are attached in their dealings with the European Union.

Though Professor Tatham’s work has now been recognized on a global stage, he insists that his success is a result of his time at the EUI, where he completed his PhD in the Department of Political and Social Sciences. The book, he told EUI Life, “is very much an EUI product.” 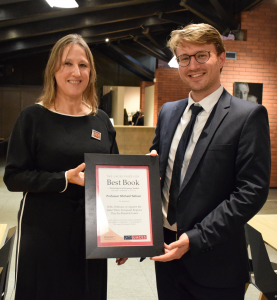 Professor Tatham was also quick to offer some words of wisdom for today’s cohort of researchers, many of whom will be hoping to follow in his footsteps. Above all else, he said, “EUI researchers should realize that they are in an exceptional environment, unique in Europe.”

Referring to the four years he spent in Florence from 2006, Professor Tatham points to the “size, richness and diversity” of the PhD group as creating a particularly “inspiring” working environment. The EUI is a meeting place at the crossroads between different nationalities and academic upbringings. As a result, he said, “you come out with a much more diversified profile than elsewhere in Europe.”

Furthermore, the resources available to EUI researchers – from library books to online material, workshops to seminars – are “very distinctive and very enriching”, something Professor Tatham says can be easily taken for granted.

Nonetheless, he adds, there a number of challenges which face researchers hoping to forge a career in academia. Most significant amongst these, he says, is “pressure to deliver research fast”. The realities of the labour market demand that PhD students produce regular content, most frequently in article form, alongside more long-term projects. To manage these pressures, Professor Tatham explains, time management is key. “Do the articles for quicker dissemination of your findings and early placement on the job ladder,” he told EUI Life, “but don’t neglect more long-term projects, such as books.”

However, none of that should stop researchers enjoying every moment of their time in Florence. “The EUI is very special,” he says. “Make the most of this place while you can.”