Professor Sangiovanni, who comes to EUI from King’s College London, where he is Professor of Philosophy, will be undertaking a research project funded by the ERC: “My new project is on social justice in the European Union. A lot of people write about the EU’s democratic deficit, and worry about what kind of institutions might serve to bring European elites closer to the public; but a question which hasn’t been as studied as much, especially by theorists, is what principles of social and distributive justice ought to apply in the EU. 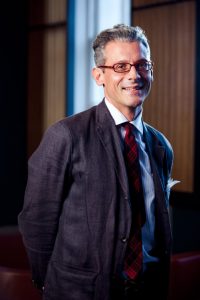 “We have all kinds of ideas in political philosophy about how to think about the nation state in that way – how much equality is too much, when and why social and distributive inequality is justifiable domestically. And we also have many ideas regarding how to think about distributive and social justice at the global level. But at the EU level it’s not clear which principles, if any, should apply. What do the Germans owe the Greeks as a matter of justice? What do creditors in the north owe the debtors in the south? Under what conditions, if any, do richer member states have duties to narrow the gap between them and poorer member states? Why is free movement such an important ideal? What happens if, as of tomorrow, we give up Schengen? What about enlargement? Do we have a duty to expand the union, or is enlargement an option to be exercised by current member states? These are all questions that I think haven’t been addressed as much in debates regarding the European Union, and that I’m going to address in the next few years.”

The professor’s latest book, ‘Humanity Without Dignity’, is on the “foundational” topic of moral equality and its implications for human rights: “what it means to treat another as an equal, and the implication of that idea for our conception of human rights.” As for his teaching duties, Professor Sangiovanni will have a packed schedule: “I have a number of research interests, they’re all in moral, legal and political philosophy mostly. I’ll be teaching a seminar called ‘Foundations of Global Justice’ in the fall, and then ‘’The Political Theory of the EU’ in the spring. I’m also supervising two students so far, and I’ll be taking on more as we go along.”

In his new appointment, Professor Sangiovanni will experience EUI life from the other side, after a spell studying at the Institute in the 1990s. “I was a visiting student here in 1996-7, and that’s in fact where I met my wife, and then we were married in the Badia in 2002. She was a PhD student, and I was a visiting student on a grant from the US. I had a lot of fun, it was a great year.” A Harvard graduate who was born in Florence and moved to the US as a child, the professor describes returning to EUI and to Florence as “in many ways a homecoming”.

Reflecting on his previous experience at EUI, Professor Sangiovanni said: “I was amazed by how all these different nationalities were thrown together, it was great. And there was just a relaxed feel – seminars were very good, small, there was time to discuss things with professors, and there were always interesting things going on. All the social life was based around Bar Fiasco, so that was a centre of life here.  I haven’t been back to Bar Fiasco since I’ve been back, but who knows…”