Dr Andreas Frijdal has retired from the Institute after 29 years of service.  He has been head of Academic Services for the last 25 of those years.

Frijdal came to the EUI from Brussels in 1985 as a research officer, a post he applied to, he said, on the urging of his wife Chris.  It was a decision, he remarks, that he never regretted.

The Academic Service calculates that under his watch, more than 3000 researchers have passed through the Institute. 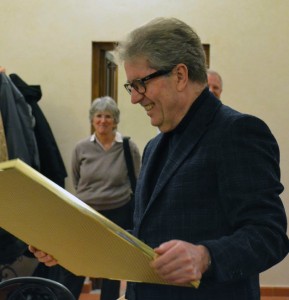 Colleagues and friends from the EUI  toasted him at a reception in his honour on 30 January.  He was commended for his years of service to the Institute, for the organization and discipline he brought to the EUI’s growing doctoral programme, and for the fairness and firmness with which he directed his responsibilities.

In a show of appreciation for Dr Frijdal, the EUI community devolved, on his request, a monetary gift to Médecins Sans Frontières (MSF).

As noted by EUI President Joseph H. H. Weiler, however, the Institute will not yet bid him farewell.  Frijdal has been asked to work on the development of the EUI’s relationships with countries well beyond the borders of Europe.