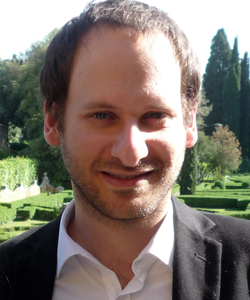 Ángel Alcalde has been awarded the Ivano Tognarini Prize in Contemporary History for his Ph.D. dissertation War Veterans and Transnational Fascism: from Fascist Italy and Nazi Germany to Francoist Spain and Vichy France (1917-1940), which he defended in 2015 in the EUI Department of History and Civilization, under the supervision of Professor Federico Romero.

The Prize is promoted by the Istituto Storico della Resistenza in Toscana, in agreement with the Tognarini family and with the patronage of the Consiglio Regionale della Toscana.

Ángel  received the prize in Florence on 2 June 2016 in the headquarters of the Consiglio Regionale della Toscana.  The award ceremony was held within the framework of the celebrations of the 70th anniversary of the Italian Republic.