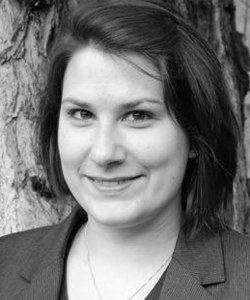 The EUI’s SPS Department has announced that this year’s recipient of the Linz-Rokkan Prize in Political Sociology is Anna auf dem Brinke for her thesis The political economy of financial risk and preferences, which she defended under the supervision of Professor Pepper Culpepper.

The annual prize was created by the SPS Department in honour of two great postwar political sociologists, Stein Rokkan and Juan Linz. The prize is sponsored by Professor Richard Rose, holder of an Honoris Causa Degree from the European University Institute, and a founding father of postwar political science in Europe.

Anna briefly discussed her thesis in reply to some questions by EUI Life.

What inspired you to pursue your thesis topic?

‘Starting my studies in London, I became fascinated by how my fellow students dealt with the sudden increase in tuition from one year to the other: They just borrowed the money and moved on. The degree, after all, would be more than worth it. It made me wonder how being in debt changed the choices they would make in their lives.  In my dissertation I investigate the link between taking on financial risks as an individual, such as borrowing money for one’s education, buying a house, or saving for a private pension, and one’s views on fair policies and what party one supports.’

How does your thesis contribute to our understanding of political behaviour?

‘We know that poorer individuals on average are more in favour of redistribution and vote for the left. I wondered whether being in debt or being exposed to financial market risk would have the same effect. Analysing panel and survey data from the United Kingdom and United States, as well as a comparative data, I show that savers are united in their political preferences, whereas borrowers are divided: People in debt do not want the same type of politics because different types of debt have different effects. People who are paying back mortgages think like homeowners and become more conservative. People with education debt care about labour market policies but not redistribution. People with overdrawn bank accounts favour more redistribution. In other words, my research shows that exposure to financial market risk appears to make people more selfish or individualistic. It is only rational but it has important effects on political behaviour, which we saw reinforced in the crisis of 2008.  The dissertation offers a micro-founded explanation for why political demands for more redistribution after the crisis in the face of growing inequality have not been successful.’

Anna will receive her award at the EUI on 10 June at the 2016 Conferring Ceremony.