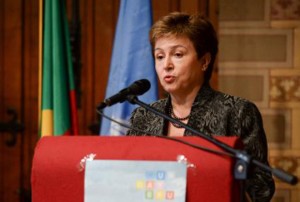 European Commissioner Kristalina Georgieva visited the EUI yesterday to deliver a keynote speech at a conference on the effectiveness and efficiency of the EU budget. The conference was organised by the Robert Schuman Centre for Advanced Studies.

In her exclusive interview with EUI Life, Georgieva responded to concerns that the EU is failing to respond to the ongoing refugee crisis with adequate financial resources. She said the Commission was ‘’seriously reassessing’’ its budgetary priorities in light of the challenges posed by the increasing influx of migrants. Conceding it is ‘’the biggest crisis we face’’, Georgieva announced that funding for refugee relief has been doubled from 4.5 billion to 9.2 billion euros.  The International Organization for Migration estimates that more than 464,000 migrants have crossed into Europe by sea for the first nine months of 2015 alone.

As co-chair of the UN General Secretary’s High-Level Panel on Humanitarian Financing, Georgieva has also been extensively involved in the Sustainable Development Goals (SDGs), which form part of the United Nations 2030 Agenda for Sustainable Development.  In her interview, she affirms that ‘’funding is absolutely crucial’’ to ensure the success of the SDGs, and pointing out that 100 billion dollars must be set aside to aid low carbon growth in developing countries.

Rejecting accusations that rising inequality in both developing and advanced economies alike is impeding the development agenda, Georgieva identified eradicating extreme poverty in ‘fragile states’ as the overriding priority.

The Commissioner also discussed her target to achieve 40% representation of women in the Commission’s senior and middle management. Central to her strategy is encouraging women in senior positions to mentor and encourage other women to put themselves forward for promotion.

You can watch EUI Life’s interview with Commissioner Georgieva here: