The beginning of a fiasco 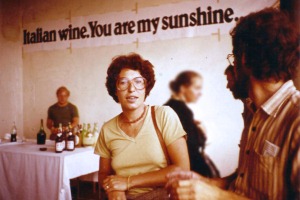 In the first of this four-part series, we look back to the founding of Bar Fiasco.

“I thought we should have something social rather than having to go to the bar in San Domenico, so I came up with the idea of setting up drinks on the terrace,” recalls Douwe Korff, a Dutch former researcher who established the EUI’s bar on 18 May 1977.

“I stole one of the doors that was standing loose and took the sheets off my bed, and we had a table. We put posters up – and translated them into every European language – which said, ‘drinks on the terrace at 5.00pm’. People showed up, bought drinks, and it was a great success.”

Beatrijs De Hartogh, who spent more than 30 years working at the Institute, remembers Korff and friends going to the supermarket to buy beer and reinventing library storage boxes as coolers. “Word travelled round pretty fast and that’s how Fiasco was born; just because people fancied a beer after sitting in the library,” she says.

While the bar was originally set up for the few dozen researchers that had arrived at the EUI when it opened in 1976, both De Hartogh and Korff say it quickly became popular with professors and staff.

The spring weather allowed for the bar to be set up on the Upper Loggia, with a view of central Florence, but its success called for new premises during the summer. Fiasco soon relocated to the cloister in what is now the Welcome Unit, De Hartogh recalls: “It was a small room but it had a tap and a sink, so it meant you could actually wash glasses. Then someone in administration gave us a tiny fridge, so we could cool drinks, and there were small tables and chairs. Then Fiasco really took off.”

The shift system which is still in place was started in 1977, with each person signing up to volunteer at the bar once a fortnight. Once a week Korff and the Bar Fiasco Committee, a group of British and Dutch people, would go to the wine shop and supermarket to stock up.

While many of the practices which began at the Badia in the 1970s are still in place, Korff remembers one key difference: “There was a shortage of small coins in Italy…We printed our own ‘banknotes’. There was a design of the front door of the Institute, by an artist who lived in San Domenico. We all signed it and that was the official note that we could use at the Institute.”

In the 1970s the bar opened a little earlier than in 2013, usually between 5.00pm and 6.00pm, yet De Hartogh remembers a similar approach being taken to ending the night: “I don’t think we had a closing time. It was usually when someone shouted, ‘Haven’t you got homes to go to?’, that people would shrug into their coats.”

Next month we’ll turn our attention to the 1980s.