The calm before the storm: Fiasco in present-day.

This Friday, Bar Fiasco celebrates its fortieth birthday. Ahead of those special celebrations, EUI Life has put together a history of the EUI’s most unique institution, from its humble beginnings to its current position at the heart of our community. Salute!

The start of a fiasco

“I thought we should have something social rather than having to go to the bar in San Domenico, so I came up with the idea of setting up drinks on the terrace,” recalls Douwe Korff, a Dutch former researcher who established the EUI’s bar on 18 May 1977.

“I stole one of the doors that was standing loose and took the sheets off my bed, and we had a table. We put posters up – and translated them into every European language – which said, ‘drinks on the terrace at 5.00pm’. People showed up, bought drinks, and it was a great success.”

Beatrijs De Hartogh, who spent more than 30 years working at the Institute, remembers Korff and friends going to the supermarket to buy beer and reinventing library storage boxes as coolers. “Word travelled round pretty fast and that’s how Fiasco was born; just because people fancied a beer after sitting in the library,” she says. 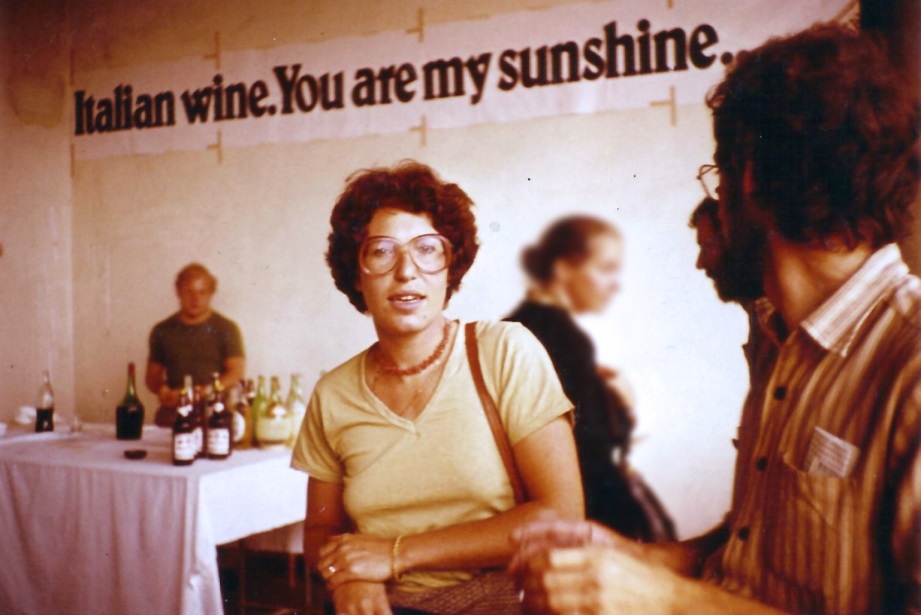 While the bar was originally set up for the few dozen researchers that had arrived at the EUI when it opened in 1976, both De Hartogh and Korff say it quickly became popular with professors and staff.

The spring weather allowed for the bar to be set up on the Upper Loggia, with a view of central Florence, but its success called for new premises during the summer. Fiasco soon relocated to the cloister in what is now the Welcome Unit, De Hartogh recalls: “It was a small room but it had a tap and a sink, so it meant you could actually wash glasses. Then someone in administration gave us a tiny fridge, so we could cool drinks, and there were small tables and chairs. Then Fiasco really took off.”

While many of the practices which began at the Badia in the 1970s are still in place, Korff remembers one key difference: “There was a shortage of small coins in Italy, so we printed our own ‘banknotes’. There was a design of the front door of the Institute, by an artist who lived in San Domenico. We all signed it and that was the official note that we could use at the Institute.”

In the 1970s the bar opened a little earlier than in present-day, usually between 5.00pm and 6.00pm, yet De Hartogh remembers a similar approach being taken to at the night’s end: “I don’t think we had a closing time. It was usually when someone shouted, ‘Haven’t you got homes to go to?’, that people would shrug into their coats.”

Expanding in the 80s

After outgrowing its space in what is now the Welcome Unit, Bar Fiasco moved to the mansarda during the 1980s. The attic space now houses the EUI Real Estate and Facilities Service, although in earlier times it was a place for tequila parties, music and football. 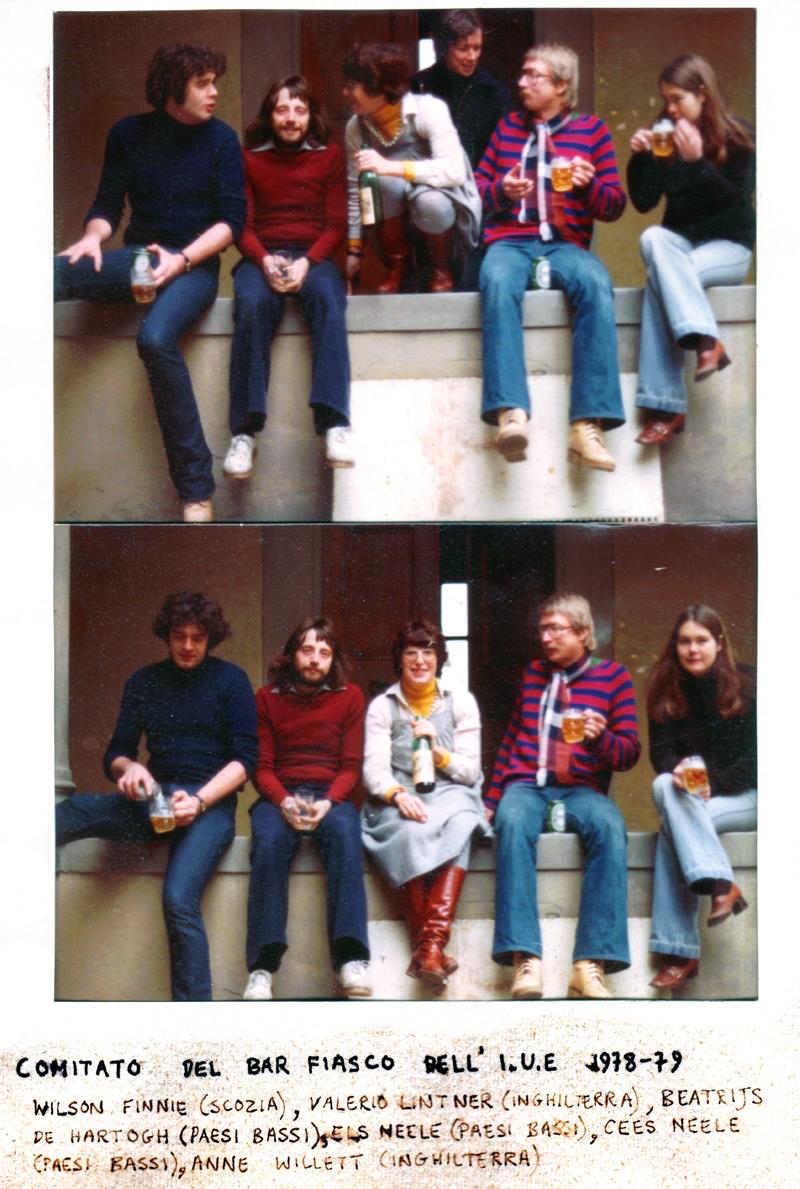 “It was the first week and we organised a Spanish tequila party; it was one of the first things we did and it was a great success. Then every nationality started doing parties at least once a month, the social scene was really strong,” says José Fernandez, who arrived at the EUI in 1988. He was on the Bar Fiasco committee while a researcher and now works at the European Investment Bank.

Fiasco soon went from its humble 1970s origins at the Upper Loggia to a bar fit for raucous parties, José says: “We got a music system from the general manager, so every Friday there was really loud music.”

Fridays were the biggest night of the week for the bar; from Monday to Thursday Fiasco was a low-key affair. “What I really liked about it was that it was great to go there at the end of a day, when you’re tired after work. If you were ever at a loose end you knew you could go there,” says Jim Newell, a professor at the University of Salford who arrived at the Badia as a researcher in 1984.

Lieven De Winter, a professor at the Catholic University of Louvain, remembers Fiasco in the 1980s as a place to mingle with researchers, staff and professors. “In my days there were a lot of staff that went for a beer. The second time I went there was because I was invited by [Professor] Peter Mair to meet some of his students,” he says.  Peter Mair passed away in 2011 and a plaque has been placed in the bar in his memory.

Lieven joined the EUI in 1984 and remembers Fiasco as being run mostly by Dutch people, while Jim and José say those propping up the bar were generally from northern Europe. The EUI’s football team was also a regular.

A television arrived, although few were drawn away from the bar until 1990 when the World Cup came to Italy.

After more than a decade of drinks and parties, researchers built on Bar Fiasco’s early success with a few changes in the 1990s.

“At one point we were making more money than a bar in Santo Spirito,” says Lavan Mahadeva, a senior research fellow in macroeconomics at the Oxford Institute for Energy Studies and former EUI researcher.

As today, Lavan and his fellow researchers learnt the ropes in their first year and agreed to a bar shift a fortnight. “We pinned up a piece of paper and people would say when they would run the bar. In exchange for running the bar, you could drink as much as you wanted. Most people were very disciplined!” 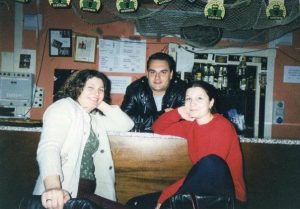 Fiasco fanatics in the 90s.

The Spanish parties of earlier decades continued into the 1990s, although other nationalities were also renowned for their events. Karen Elisa Diehl, a freelance translator and writer and former history researcher, remembers those from further north: “The most crowded parties were the Scandinavian ones, which extended to the Sala Rossa downstairs. They did rice pudding and had a tombola where you could win things. Absolut Vodka sponsored them so there was free vodka when the bell rang.”

Despite the increasing success of the bar, an informal atmosphere prevailed. Karen recalls researchers finishing their bar shifts at 10.00pm and leaving Bar Fiasco in the hands of its customers for the rest of the night. “There was a cage where we could lock up the supplies; we would leave some on the shelves and take out the big cash and lock it,” she says.

Lavan remembers the bar as the focal point of the EUI; he returned the day after his thesis defense to run the bar with his supervisor. “I’m glad that the social life is still going on,” he says. “It’s important for people to feel happy and enjoy themselves. Having a social centre helps.”

Fast forward to present-day, and Fiasco still sits at the heart of the EUI community. Wiebke Drews, whose year-long term as one of the bar’s head honchos comes to an end this week, spoke to EUI Life about what the bar means to her, and what she and her team of Fiasco fiends have in store on Friday evening.

“Fiasco was super-magical for me in my first year,” Drews recalls, noting how she met most of her closest friends over a beer in the bar. Now at the start of her third year, she says Fiasco has lost none of its allure, despite the fact that standing behind the bar has proved considerably more taxing than sitting in front of it.

Speaking to EUI Life amidst crisis (last night’s bartenders have misplaced the all-important key to the fridge), Drews reflects on just how significant Fiasco is to the EUI community. It is the Institute’s “most important institution,” she says. Without it, the EUI would be a very different place.

The entire EUI community “would know each other far less” if it weren’t for its favourite watering-hole, Drews speculates. “We would become far more individual in our day-to-day lives and we would make less friends. The beauty of the EUI is that it is so open, and that we all help one another out. Fiasco helps that a lot,” she grins, enthusiastically slapping the bar at which she has spent countless hours over the past two years. 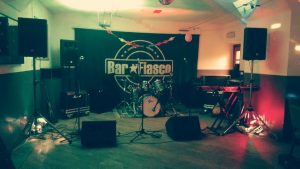 The calm before the storm: Fiasco in present-day.

As for the future, Drews has no doubt that Fiasco will continue to be an integral part of life at the EUI for a long time to come. After enduring some financial difficulties in the mid-noughties, the bar has now been debt free for several  years. Fiasco’s profitability have allowed it to make some interior improvements – with fridges, a new kitchen corner with ovens for pizzas, new furniture and a brand new coat of paint all being added to the bar in recent years.

In that spirit, this Friday is all about celebrating how far Fiasco has come over the past four decades, and Drews has big plans. “We have a BBQ outside with draught beer, similar to what we do for the Coppa Pavone,” she explains. “There is a jam session starting around 9pm, with former Fiasco superstars coming together with the new generation to play some music. There will be a birthday cake, and some special merchandise on sale too.”

Rumour has it that former managers and bar bigwigs are jetting in to the Badia, specifically to raise a glass to forty years of Fiasco frivolity. There is only one place to be on Friday night – you’d be a fool to miss it.

Rosie Scammell and Mark Briggs contributed reporting to this article.