In the third of our four-part series on Bar Fiasco, we turn to the 1990s.

After more than a decade of drinks and parties, researchers built on Bar Fiasco’s early success with a few changes in the 1990s. 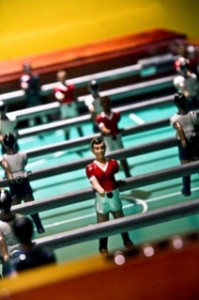 “At one point we were making more money than a bar in Santo Spirito,” says Lavan Mahadeva, a senior research fellow in macroeconomics at the Oxford Institute for Energy Studies and former EUI researcher.

As today, Lavan and his fellow researchers learnt the ropes in their first year and agreed to a bar shift a fortnight. “We pinned up a piece of paper and people would say when they would run the bar. In exchange for running the bar, you could drink as much as you wanted. Most people were very disciplined!”

The Spanish parties of earlier decades continued into the 1990s, although other nationalities were also renowned for their events. Karen Elisa Diehl, a freelance translator and writer and former history researcher, remembers those from further north: “The most crowded parties were the Scandinavian ones, which extended to the Sala Rossa downstairs. They did rice pudding and had a tombola where you could win things. Absolut vodka sponsored them so there was free vodka when the bell rang.”

Lavan remembers the Spanish dressing up for their national nights and the Italian parties for the food. On other nights hungry academics could take advantage of sandwiches at 5.30pm, while a couple of hours later a different crowd would arrive for drinks.

With a new supplier came wine tasting events, Karen says, and the arrival of new beers such as Stella Artois and Leffe. Corona was scrapped due to the lack of lemons, she recalls.

Other important decisions included the introduction of a VCR for the television room and the decision to never purchase a smoke machine.

Despite the increasing success of the bar, an informal atmosphere prevailed. Karen recalls researchers finishing their bar shifts at 10.00pm and leaving Bar Fiasco in the hands of its customers for the rest of the night. “There was a cage where we could lock up the supplies; we would leave some on the shelves and take out the big cash and lock it,” she says.

Lavan remembers the bar as the focal point of the EUI; he returned the day after his thesis defence to run the bar with his supervisor. “I’m glad that the social life is still going on,” he says. “It’s important for people to feel happy and enjoy themselves. Having a social centre helps.”

Our report on Bar Fiasco in the 1980s can be found here.