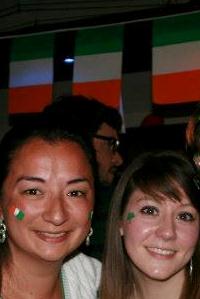 In the final instalment in our series on Bar Fiasco, EUI Life brings the story up date and talks to one half of the current management team, Diana Maria Natermann, about her time in charge.

“The biggest changes have definitely been the interior improvements, which happened within the last 10 months,” says Natermann, “We have new fridges, a new kitchen corner with ovens for the pizza, new furniture, and a new paint job. Everything that had to be renewed was renewed.”

After financial difficulties in the mid-00s, the bar is now on firmer financial footing having been debt free for the last three years, culminating in last year’s sizable donation to charity from the bar’s profits: “We paid 10,000 euros into the Welfare and Social Fund. So you could say you’re drinking for a good cause!”

With healthier finances the Bar has been able to reach out and support social events held around the EUI: “We had an outdoor fridge during the Coppa Pavone, and some umbrellas for the bar and the BBQ. It was a nice way to get people to stay until the last match was over by serving food and drink.”

Supplementing the established round of country parties and televised football, Fiasco is now able to take requests for screenings having bought a Sky contract a few years ago. This new edition has allowed Fiasco to host special events ranging from the Eurovision Song Contest to an all-nighter pulled for the 2012 US presidential election.

Despite this, Natermann says the charm of Fiasco remains its ability to help people relax after long hours in the library: “We’re a little isolated up here on the hills so Fiasco is a great place to meet friends for a pizza and a beer, especially as deadlines approach.”

“[Working here] you get to meet researchers, professor, fellows, also staff. I’m told there aren’t as many professors as in the past, which is a shame, but you can see everyone represented from every part of the EUI. You get to meet people you wouldn’t come into contact with, especially outside your faculty.

“Last year’s highlights were definitely performances by EUI bands, there’s a grand atmosphere and songs from the Beatles to Russian folk! It would be great if we could keep up this trend to have EUI members perform with their own bands in Fiasco.”

Natermann shares her managerial duties with Elizabeth O’Loughlin who takes care of the front of house such staff rotas, while Natermann focuses on the accounts. The management contracts last 12 months with her term due to end in October: “It’s important we get two new managers who can keep going on the positive track we are on.

“We have a committee that includes not just the managers, but every volunteer; even the people who drive us to the supermarket to get food!

“There is no financial payment, but the nights they work volunteers can eat and drink for free, so that usually does the trick. To become a volunteer just make yourself known to anyone involved, do a trial shift and then someone will show you the ropes.”