More than 30 years at the EUI 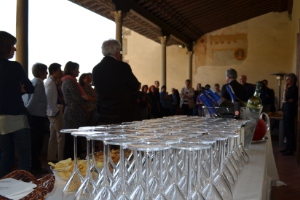 When Bob Danziger joined the EUI in 1982 the campus consisted of just the Badia and a PC was hard to find.

He spoke to EUI Life on his retirement in April, after more than 30 years working in computing at the Institute.

Bob was teaching at the University of Mannheim before moving to Florence to become the contact person between the Department of Political and Social Sciences and the Computing Service. His arrival was one still common today, he recalls: “When you come from northern Europe you think you’re in a tropical paradise! The place is amazingly beautiful and an enjoyable place to work.”

But Bob’s job has changed remarkably over the past three decades, in parallel with technological developments. “It’s hard to imagine,” he says, “The introduction of user-friendly word-processing software is what brought the masses into computing, before the heavy introduction of PCs in the 1980s.”

He worked as an academic within the computing service before working more closely with the administrative staff.

As computing changed so too did the Institute, including the founding of the Robert Schuman Centre for Advanced Studies in 1992. “The research and intellectual environment became much more exciting,” Bob says, “The Institute was able to attract increasing numbers of interesting people; it was like a snowball effect.”

Bob will be leaving Florence at the end of May to return to Mannheim, ahead of a year of travel taking in three continents.