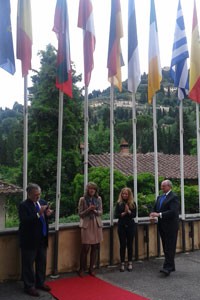 The European University Institute is proud to announce that Bulgaria officially became a member of the EUI on 2 June, making it the 22nd contracting state of the Institute.

The Bulgarian flag was raised during a ceremony at the Badia Fiesolana, organized in the framework of the meeting of the High Council, before a crowd of delegates, academics and members of the EUI.

With the accession, aspiring academics from Bulgaria will have the opportunity to apply for a four-year Ph.D. grant.  The first award is foreseen for the 2017/18 academic year.

Commenting on the inclusion of Bulgaria among EUI contracting states, Ambassador Schioppa Narrante said ‘We are very happy that Bulgaria has become part of the EUI. The country is an important member of the EU, and its participation in the life of the Institute will strengthen the presence of the Slavic culture in our community.’