Catching up with Jessica Spataro, retired after 34 years 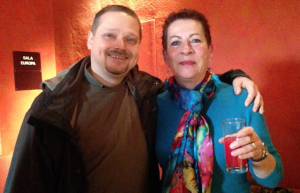 Jessica Spataro, who worked for the Economics Department for more than 34 years, officially retired at the end of February.  In an extraordinary send-off, academics, alumni and former faculty who have been at the ECO department in the last four decades surprised her with their personal and video testimonies at a conference in her honour in  January celebrating the 40th anniversary of the Institute.

Her retirement was also celebrated by the EUI Community as a whole at a party at the end of February.

Now that she’s had a few months to relax, EUI Life caught up with Jessica to ask her a few questions:

What brought you to the EUI?

I had already been living in Florence for 9 years when I received a phonecall from Jacqueline Bourgonje who told me that the EUI was looking for an English mother-tongue secretary. At the time I said no, since I had a 3 year old and a 6 month old, but I was persuaded to come and have a look and decided that it was too good a chance to pass up on! So I started on 15 October 1981, 34 and a half years ago.

What is your favourite memory from your early years at the Institute?

When I first started computers were unheard of, we only had electric typewriters, and typing an economics paper full of equations on a typewriter was not so easy. We had golfballs with the Greek letters  on them so we would type with a list in front of us with the equivalent Greek and Roman letters . Internet also didn’t exist, neither did the fax machine.  We had a telex and a photocopy machine which only took one page at a time, having to lift the cover for each page. Organising a conference was a completely different thing from now, when you send a group email, then you would actually type and print an individual letter for each participant and send them by post, which meant having to start a long time in advance, allowing for the slowness of (especially) the Italian mail service.

At the beginning we were all based at the Badia, apart from the finance department at Villa Poggiolo. This meant that we were like a large family, and there was much more interaction between the different departments and services, so we actually knew people not only from the Economics Department. Then HEC and Law were moved to Villa Schifanoia and finally in 2003 Economics went to Villa San Paolo, completing the disaggregation of the Institute’s four departments.

Now that you have had two months to reflect, what has left you most satisfied with your career?

When I started in 1981 I was the same age as many of the PhD students, whereas when I left they were younger than my younger son. I enjoyed my role as “vice mother” very much, especially since I was very aware of the isolation of the Economics students from the rest of the Institute and I hope that I was successful in supporting them in their difficult and stressful first year. I think the fact that the administrative staff of the Economics Department is thanked in almost all the PhD theses means that I did something right!