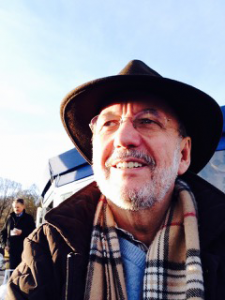 Christian H. Huber is an alumnus of the first cohort of EUI researchers in the SPS Department. He was a researcher from 1976-1979 and a junior research fellow from 1979-1980.  He is now retired from his post as a Director at the Secretariat-General of the European Parliament, where he worked for 35 years.

The recent obituaries in EUI Life in memory of Professors Hans Daalder and Geoffrey Hand, who both passed away this spring, inspired me to share some memories from the early days of the EUI in 1976.

It is a sad coincidence that both passed away this year, which marks the 40th anniversary of the opening of the first academic year. Both Hans Daalder and Geoffrey Hand were part of the small number of eight founding professors who welcomed us, the first 60 ricercatori at the EUI this October forty years ago. I met Hans Daalder for the first time in June 1976 during the admission interviews for the SPS Department held at the Charlemagne building in Brussels, the (then) seat of the EC-Council of Ministers, together with Professor Jacques Georgel. My interview was conducted primarily by Hans Daalder, who shared with me the experience of having studied at the LSE and an interest in the comparative study of political parties.

Inter-disciplinary from the start

Arriving at the EUI in early October 1976, together with my Italian wife Manuela Rossi, I soon became involved in one of the first interdisciplinary research projects of the Law and SPS Departments, on “problems of establishing a uniform electoral procedure for direct elections to the EP” which was initiated by Prof. Christoph Sasse, Head of Law Department, and developed in cooperation with Professors Georgel (SPS) and Hand (LAW). Together with two other ricercatori of the first cohort, David Brew (SPS) and Guido van den Berghe (LAW), I was invited to form an informal steering committee in charge of developing the project details in combination with seminars.  Hans Daalder as Head of the SPS Department gave his green light, allowing thus two of ‘his’ researchers to engage in this interdisciplinary experience.

Until the untimely death of Professor Sasse in February 1979 in a road accident near Florence, the project advanced at a good pace, taking advantage of the combined expertise assembled at the Badia and of two conferences in 1978, held in Florence and Rome with experts from national parliaments and European institutions.  An important by-product was the publication of the European Electoral Systems Handbook (published in parallel in Germany, the UK, France and Italy in early 1979).

The passing away of this grand spiritus rector of the Law Department, (Prof Sasse also had initiated a project on ‘the evolution of fundamental rights and their protection in different European states’) left an important void, which Geoffrey Hand managed to fill in his style to see these projects through to completion in the memory of this dedicated European scholar. Hand became our first and foremost interlocutor during the final phases of the project and it was thanks to him that this project was finished in 1980 and published as The European Parliament: Towards a uniform procedure for direct elections (a still very topical theme as the recent EUI/EP seminar shows).

Hans Daalder and Geoffrey Hand were ex-officio members of the Academic Council. I myself, having the privilege of being the first elected SPS Researcher Representative at the AC could witness – and sometimes challenge – their views expressed in not less than 17 AC meetings during the first academic year. These were exciting days, as basic rules were to be set up regarding the nature of the doctorate, requirements for renewal of the terms of office for EUI professors and the rules for assessing the applications / qualifications for the 2nd academic year.  Geoffrey Hand was invited to draw up the first set of “formal academic requirements for research students”, which he did with his  profound experience as former Dean of the UCD Law Faculty (1970-1975). Hand was open to pertinent suggestions from, in particular, Hans Daalder, and he took on board many recommendations from the researchers’ side. In the end, the rules adopted by the Academic Council in January 1977 helped to structure the activities of the four departments more coherently and presented a balance between US-style “PhD schools” and classical individual thesis work.

Networking by the profs was essential for bringing internationally experienced and distinguished visiting academics and conference guests to Florence. What seems now one of the big acquired advantages of the EUI was at the time only nascent (though admittedly the attractive location of the EUI at the Badia played a role too).  Geoffrey Hand was surely of a very different – softer – character than Hans Daalder, the latter being always very straightforward and outspoken. But both were genuinely open-minded to all questions concerning researchers, inspiring them beyond their doctoral thesis work. Thanks to Hans Daalder, who was co-founder and then Chair of the European Consortium for Political Research, the EUI provided ways and means for introducing SPS ricercatori to this already highly acknowledged forum, enabling us to participate at ECPR conferences in Berlin and Mannheim in early 1978.

Looking outward and beyond

I left the EUI in spring 1980 to join the Secretariat General of the European Parliament, where I served for 35 years in various positions, among them from 1999 to 2009 as Head of the Secretariat of the Committee on Foreign Affairs and later as Director for Democracy Support at the DG for External Policies of the Union.

I am very pleased that over all the years the European Parliament actively supported the EUI, often taking advantage of its expertise, which culminated into the current bilateral cooperation agreement.  And it always gave me great pleasure to receive and advise researchers from the EUI and or to welcome them as new colleagues at the EP, since they lived up to those expectations described by Geoffrey Hand in December 1977 as essential: “our graduates should carry with them (…) a comparative awareness, an interdisciplinary awareness, and above all a European awareness.”

Providing the foundations for this is not the least accomplishment for which we should acknowledge our founding generation of professors.  They set the example for later generations of professors and researchers, who over the last 40 years have developed the EUI  into such a high quality academic institution.