A research network on cultural heritage law born at the EUI continues to thrive, though its members are now dispersed across the globe.

Several current and former PhD researchers from the EUI contributed to the first All Art and Cultural Heritage Law Conference organized by the Art-Law Centre of the University of Geneva (13-14 June 2014). All were supervisees of Professor Francesco Francioni and members of the Working Group (WG) on Cultural Heritage at the EUI, which provided an important context in which researchers interested in international law on cultural heritage could discuss their projects and benefit from lectures and workshops given by renowned scholars and practitioners in the field. The WG members have all pursued careers related to cultural heritage and contribute to the EUI’s far-reaching influence in the field of international law.

Working group members, most of whom have finished their doctorates, now occupy academic and government posts in Europe and beyond. 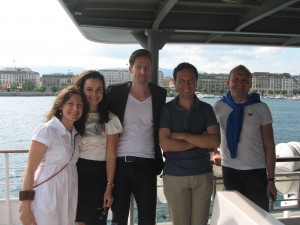 Alessandro Chechi is currently a researcher and a teaching assistant at the Art-Law Centre, Faculty of Law, of the University of Geneva (Switzerland). He has recently published a book on the basis of his PhD thesis defended in 2011 at the EUI: The Settlement of International Cultural Heritage Disputes, OUP, 2014. Alessandro co-organized the first All Art and Cultural Heritage Law Conference in Geneva.

Andrzej Jakubowski earned his Ph.D. from the EUI in 2011. He is currently an Assistant Professor at the Institute of Law Studies of the Polish Academy of Sciences (Warsaw) and lectures in art and law at the Institute of Art History, University of Warsaw. His thesis on State Succession in Cultural Property is being published with Oxford University Press. He is also working on a co-edited volume: “Cultural Rights in International Law – Relocating Third-Generation Human Rights”.

Robert Peters works for the German Federal Government Commissioner for Culture and the Media in Berlin on the issues of protection and return of cultural property under EU and international law. Lately, he has been involved in drafting the Operational Guidelines to the 1970 UNESCO Convention. In 2008 he worked in UNESCO’s Legal Office. He defended his PhD thesis on alternative solutions in restitution disputes at the EUI in 2011.

Lucas Lixinski published his Ph.D thesis on Intangible Cultural Heritage in International Law with Oxford University Press in 2013 and is now lecturer in international law at the law faculty of the University of New South Wales, Australia.

Valentina Vadi is reader in international economic law at the University of Lancaster and has just published her monograph on Cultural Heritage in International Investment Law and Arbitration with Cambridge University Press. She is also editing with Bruno De Witte a volume on Culture and International Economic Law.

Adriana Bessa discussed her thesis entitled Traditional Local Communities in International Law at the European University Institute last December. She now provides consultancy in the field of local communities’ rights and traditional knowledge protection in Geneva. Moreover, she is a lecturer in biodiversity law at the University of Alicante, Spain.

The last two researchers of the Cultural Heritage WG supervised by Professor Francioni are Berenika Drazewska, who is currently finishing her thesis on military necessity and the protection of cultural heritage during armed conflicts and Marlene Losier, who is working on the concept of property with regard to underwater cultural objects.