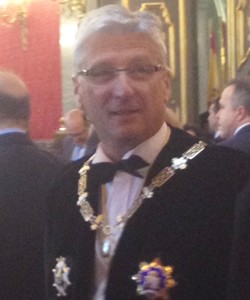 Congratulations to former EUI Law professor Luis María Diez-Picazo, who was elected as the new President of the Third Chamber of Spain’s Supreme Court by the Spanish Plenary of the General Council of the Judiciary, in July.

Diaz-Picazo did his doctorate in the Royal College of Spain at the University of Bologna before becoming counsellor in the Spanish Ministry of Justice.

He has worked as a lawyer in Malaga and Madrid, an activity that he combined with teaching as a professor at the University of Malaga, the Instituto de Empresa in Madrid and the University College of Financial Studies, at the Universities of Malaga and Castilla-La Mancha and here at the EUI, where he was Professor of Comparative Public Law between 1989 and 1997 and Department Chair in the years 1991/92 and 1994/95.