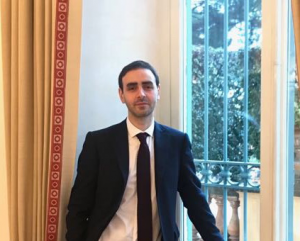 Congratulations to EUI alumnus in Social and Political Sciences Dr. Marco Valbruzzi, who has been awarded the Linz/Rokkan Prize for the best doctoral thesis in the field of political sociology for his EUI doctoral dissertation, Government alternation in Western Europe : a comparative exploration.

Dr. Valbruzzi  will accept his Ph.D. degree with other EUI graduates at the Conferring Ceremony on the 14th of June at the Badia Fiesolana. The prize committee said that they “particularly admired the thoroughness and meticulousness of his conceptual work and analysis, and how he systematically builds up the conceptual and descriptive bivariate foundations before ending with an encompassing multivariate analysis.” They also commented that “he tackles a very important topic and justifies his topic selection very well.”

EUI Life spoke with Dr. Valbruzzi about his work, past and present, and his EUI experience.

Can you tell us about your thesis?

In the last thirty years, alternation in government has become a common practice in Western Europe. Unfortunately, democratic theories and theorists have mostly neglected this crucial phenomenon in many political systems. My thesis aims to fill this gap between theory and practice. In the first part, the dissertation puts forward a new and original conceptual toolkit for the analysis of government alternation across countries and through time. The second part of the thesis is devoted to the empirical analysis of the suggested determinants of alternation in government. Finally, in the third and last part I analyse the foreseeable evolution of government alternation in Western Europe, especially in relation to the impact of the current economic crisis on the functioning of West European democracies.

How does it feel to win the Linz/Rokkan Prize?

My reaction is full of joy, happiness and satisfaction: when you work hard for something which is important for you and you receive such a honour, you can’t ask for better. Moreover, this prize is dedicated to two leading and legendary scholars in the field of comparative politics: Juan Linz and Stein Rokkan. They are giants on whose shoulders I tried to climb to see farther.

Do you have any thoughts on your experience at EUI?

The EUI somewhat resembles a busy seaport. People, scholars, students, and researchers constantly come and go. Among this flux of people, I had the good fortune of crossing paths with other professors and scholars, who offered me their time and, most importantly, shared their ideas. That’s what makes a young student a conscious and experienced researcher in the field of comparative politics. This Institute in Fiesole is not only an academic institution. It is, so to speak, a state of mind and one of best fulfillments of that idea of Europe that we, as Europeans, should defend.

What are you up to now post-EUI?

I am a Research Fellow at the University of Bologna and Adjunct Professor at the Gonzaga University in Florence. I’m currently working on many projects, the most important of which concern the transformation of West European party systems across new political cleavages and the changing electoral behavior investigate at the micro, local level.

Any advice for researchers currently working on their theses?

Do it with passion and with a great deal of ‘politological immagination’. We are living in a changing world, in which the traditional theoretical coordinates turn out to be misleading or partially useless. We are in need of new, original, theoretical perspectives and I hope that the new EUI researchers will devote part of their time/thesis to this task. And, in addition, I hope they will resist to the temptation of sterile ultra-specialization. The more you cross-fertilize your scientific knowledge with other sectors, the better for your thesis and your academic research.