Roland Erne, EUI alumnus, has been awarded an ERC grant for his project 'European Unions'. 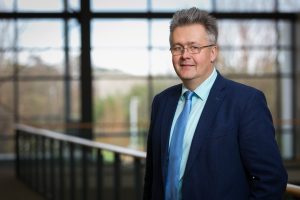 Roland Erne, EUI alumnus, has been awarded an ERC grant for his project ‘European Unions’.

The great and good of EUI years gone by continue to make waves in the broader academic community. The latest alumnus to make a splash is Roland Erne, who undertook his PhD in Political Science at the Institute between 1998 and 2002. Erne, who has been teaching international and comparative employment relations at University College Dublin since 2003, was recently made the recipient of a European Research Council (ERC) grant, for his project European Unions: Labour Politics and the EU’s New Economic Governance Regime.

Speaking to EUI Life, Erne reflected that he was ‘lucky’ to have received the five-year, €2 million grant due to the quality of the scores of other applicants, but also said he was ‘very happy’ to be able to wholeheartedly pursue a project that has been close to his heart for some time.

‘The starting point’ for European Unions, he said, was an acknowledgement that ‘until recently, labour politics have been shaped horizontal EU market integration,’ through the free movement of goods, capital, services and people. Then, in 2011, Brussels adopted a new set of laws to correct ‘macroeconomic imbalances’, which made European integration ‘much more vertical’ through the direct surveillance of member states. The EU’s resulting new governance regime, Erne argues, threatens the major role that European trade unions play in ‘democratic interest intermediation.’

European Unions, therefore, plans to explore the challenges and opportunities that the new EU governance regime poses to labour politics. Though he says it was ‘quite challenging’ to set up the project, Erne says that he would encourage others to try their arm too. ‘The ERC is looking for academic contributions, which means you don’t need to comply with the mainstream view in the European Commission. There is space for more critical projects.’ Real scholarship, Erne claims, ‘is really rewarded.’

As for his advice to the EUI’s current cohort of researchers and academics? ‘Do not be shy of publishing monographs and books.’ In the early days of his academic career, Erne revealed, he was often encouraged to publish journal pieces and articles. But he resisted, and sought instead to publish his work as a monograph,  which he believes won him visibility ‘beyond the narrow field of industrial relations.’ While they may take more time, Erne remains adamant that publishing a book or monograph ‘could give this little extra that distinguishes you and takes your career further.’