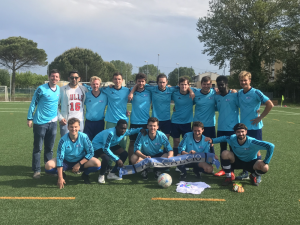 The EUI’s Squadra Fantastica competed with teams from as far as Udine and Syracuse in the annual Festa del Calcio football tournament, organised by the Associazione Italiana Cultura e Sport (AICS) between the 23rd and 26th of May in Cervia.

The Festa consisted of various tournaments in 11-, 7- and 5- a-side football. The EUI side, who qualified due to their participation in the Florentine B1 league each year, played a 7-a-side team rather than their usual 11-a-side.

The sun was beating hard on Cervia’s Campo Brian Filipi as the Squadra confronted various (and much younger) teams from all over Italy. After a difficult start, the team managed to secure a place in the final stages of the ‘Coppa Italia’, thanks to goals from Moussa Sidibe and Andres Reiljan.

In the semi-finals, the team conceded a loss to the Benacquista team from Frosinone – a defeat that could perhaps be explained by the entertainment that the town had on offer the night before.

The team fought tooth and nail in competing for third place against the La Tavernetta team from Syracuse. A narrow loss of 7-5 placed the team fourth overall, with goals from Rashil Conde and Lorenzo Giuntini.

In addition to the cup for fourth place, the Squadra were pleasantly surprised to learn that they had also been awarded the Fair Play Cup, and they received compliments from the President of AICS for the spirit shown on the pitch.

Following their success in Cervia, the Squadra secured the “Salvezza” in the Florentine B1 league on Tuesday the 28th of May, meaning that the team will play in the same competition again from October.

Jan Karremans, of the Squadra, said: “The Fair Play Cup is a great achievement for the team and what it stands for. Our position in fourth place was possibly even due to an excess of fair play on behalf of the Squadra! And securing the Salvezza to continue playing in the B1 league means that the team can continue in its aim of bringing the institute closer to the city, and the city closer to the institute.”

After a string of hard-fought victories, the Squadra look forward to celebrating their success with a barbecue at Bar Fiasco on the 8th of June.