The EUI men’s football team are celebrating promotion after the winning their league with one game to spare. 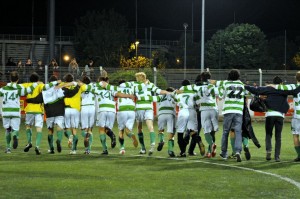 The “Squadra Fantastica” fought off competition from local teams to finish top of the AICS Calcio League B2, which they have competed in for the last 15 years.

“Traditionally the EUI’s team doesn’t do that well,” said Alex ‘Presi’ Trechsel, “We have a massive turnover (of players). This year the chemistry was absolutely excellent. We had a huge squad of over 40 people, all of them played at some point this season.”

It is this welcoming atmosphere that makes the team so fun to play for according to German ‘Eternal’ Gomez “We have a very inclusive philosophy. We want to welcome everyone at the EUI to the team. At the end, it is about having fun, and having an activity outside academia.”

Huge credit goes to the Misters, the managers who organise training, and the teams for each game, including Damien ‘Pim Pam’ Puy. “This year we did well to integrate people into the team, we had people coming from different levels and styles of play.”

While the team are enjoying their success, they are already looking to build for next season, both on and off the pitch. “The last game we were already champions” remembers Metin ‘Treno’ Nebiler, “and 50 people came to watch. Maybe people will next year come and have a drink and support us.”

For Club President Alex ‘Presi’ Trechsel the sense of community is as important as the results. “We are not only helping people integrate with the EUI, but also with the city. We have people in the team who are from the city, and it brings the EUI closer to the city and the city closer to the EUI.”