Do plants think?  Can a fungus ‘know’? And is it just or right to uproot an ivy that has ‘chosen’ to entwine itself around a tree trunk? 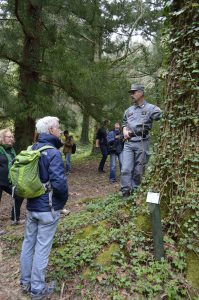 One might expect a group of academics and the people who work with them to engage in a little ‘shop talk’, even on a nature walk, but it was the enthusiasm and passion with which Marshal Giovanni Susini communicated his knowledge about the botanical inhabitants of the natural forest reserve Vallombrosa that sparked appreciation for the above inquiries and prompted some playful debate on neurobiology and human-plant ethics.

Marshall Susini, who has worked at Vallombrosa with the Carabinieri Forestale for twenty-two years, explained that when he started as a young officer, he mainly focused on being able to identify the plants and animals of the area.  ‘Now,’ he says, ‘when I go into the forest I’m always wondering about how they get along, how they behave, how they interact with each other.’

The guided visit at Vallombrosa started with a tour of the historic monastery on the site, founded by Benedictine monks in 1036. Don Marco, a member of the monastic community there, took the group through the structure, explaining the art and furnishings of the abbey’s church, cloister, refectory, and original kitchen. He also described the daily routine of members of the order, which is organized around the activities of work, prayer and study. 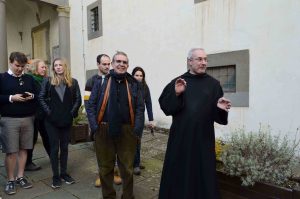 The choice to situate the abbey high in the woods of Pratomagno not only permitted the type of simple, meditative life espoused by the order, but it also gave them an activity: cultivating and working the abies alba, or European white fir. This tree not only yields a valued wood, but its seed is an essential ingredient in the fir brandy produced and sold by the monks.

The day of nature, art and history was organized for the group of 50 EUI members by the office of Secretary General Vincenzo Grassi.  ‘This initiative,’ Grassi explained, ‘was originally designed by Ambassador Schioppa Narrante, but unfortunately he did not have the chance to realize it.’  The Secretary General, who participated in the trip along with President Renaud Dehousse and a mix of researchers, fellows, professors and staff members, found the day rewarding for a number of reasons. ‘It raises the sense of community,’ he said.  ‘It was an opportunity for a diverse group of EUI members to spend the day together.’  In remarks that were echoed by the other participants, he also underscored the importance of appreciating the natural beauty of the region.  ‘Immersed in their work, EUI members often confine themselves to the Florence area, which is full of its own beauty and treasures.  This was a chance for them to get out and see the beautiful landscape away from the city.’ 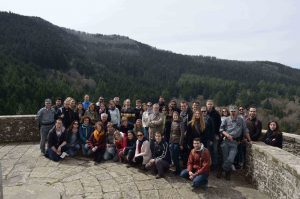 The visit, which was possible thanks to the kind collaboration of the Comando Regione Carabinieri Forestale, our close neighbours at the ‘Poggiolo’, also pleased the Secretary General because it brought the Institute’s international community in touch with the Italian authorities in a positive way.  ‘The welcome we received today from Colonel Carlo Chiavacci and Marshall Susini overcomes stereotypes one might hear about Italians.  Their knowledge about and dedication to the forest and monastery were clear and appreciated by everyone.’

Xiaohang Chen, a first-year researcher in LAW, shared the Secretary General’s enthusiasm.  ‘I came along because I wanted to meet a mix of people from the Institute, and I also wanted to come close to nature.’  Now in Italy after six years of study in Beijing, a walk in the fresh air and high altitude of Vallombrosa was a welcome change from his daily routine of reading and study in the EUI Library.

Jose Juan Perez Melendez, Max Weber Fellow, and Anna Coda, the Departmental Coordinator of the History Department, both found their walk through the Arboretum to be most enjoyable.  ‘The corporal’s passion for the topic was so obvious,’ Coda remarked.  ‘I think the trip was a fantastic idea!’