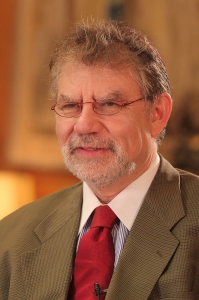 After successfully defending his PhD at the EUI in 1982, Joseph HH Weiler became head of the Law Department, co-founding the Academy of European Law and the European Policy Unit, the precursor of the Robert Schuman Centre, here at the EUI.  He went on to serve as a member of the Committee of Jurists of the Institutional Affairs Committee of the European Parliament, inter alia co-drafting the European Parliament’s Declaration of Human Rights and Freedoms. He is currently a WTO and NAFTA panellist and holds the position of Editor in Chief of EJIL – the European Journal of International Law and ICON – the International Journal of Constitutional Law.

Having worked at prestigious universities around the world including Harvard Law School, and Michigan Law School, Professor Weiler’s most recent  post was at New York University Law School where he held the positions of University Professor as well as European Union Jean Monnet Chair, Director of the Straus Institute for the Advanced Study of Law & Justice, and Co-Director of the Tikvah Center for Law & Jewish Civilization.

Now president of the Institute, Professor Weiler sat down with EUI Life to discuss his motivations for returning to his alma mater.

“I’ve never been in one place in my life more than 10 years. The Wandering (and wondering) Jew is hardwired into me.  Last year I told the dean at NYU ‘I’m getting this itch’. Just in terms of the cycles of my life I was looking for something new and challenging to do.”

Despite his career taking him to elite institutions around the world, Professor Weiler has maintained an affinity with the EUI, based not only on personal experience, but the institute’s academic achievements: “Countless people have heard me say: ”The best place in the world to do a doctorate is not NYU or Harvard; it’s the EUI. I say this because of the quality of the doctorates. This is a place that increases the chances of people doing a good doctorate, not in the sense that they merely complete it, but making an original contribution, writing something that is of some consequence.

“Let’s not deny it; these are beautiful surroundings, in the heart of historic Europe. When you are trying to see beyond the usual horizon of your field, the fact you are in and with beauty makes a difference.”

While the location undoubtedly plays a role in its charm, according to Professor Weiler there is something even more unique about the EUI: “I was a student at Cambridge in UK, there were students there from all over the world, it is a wonderful institution, but it is a quintessentially English institution. I was a professor at Harvard; there were students and faculty from all over the world there too. It was a quintessentially American institution. What is totally unique to the EUI, [it] does not have a national identity. Here people react to each other as human beings, that is very captivating. The experience of the doctoral student is not loneliness; he or she are part of an intellectual community.

“[However] the specificity of the EUI has to be re-thought. It was a very different place 40 years ago when it was founded.  It is a moment where the institute has to re-think its identity a bit.  I found the sense of challenge attractive.”