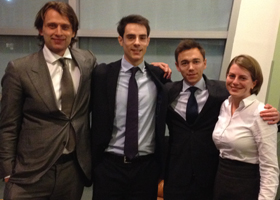 Congratulations to the EUI’s European Law Moot Court (ELMC) team, which reached the regional semi-finals at Columbia University in New York in February. The ELMC is considered the most prestigious moot court competition within the field of EU Law.

Represented by LAW researchers Esther Drabkin-Reiter, Christopher Johnson and Elias Deutscher and coached by Jotte Mulder, the EUI team only narrowly missed out on reaching the finals after a defeat to Maastricht.

The EUI team qualified for the regional competition based on their performance in a preliminary written round, where they placed among the top 48 teams in the world.

Elias Deutscher won the individual prize for the best European Commission representative at the regional finals. He will represent the EUI at the finals before the judges of the European Court of Justice in Luxembourg.