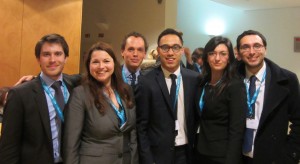 The European Law Moot Court competition is a pleading competition on EU law created 25 years ago. Between 70 and 80 teams from universities all over the world compete between September and April on a case of EU law. The competition involves a written phase, where each team has to submit observations on the case. The 48 best teams qualify for one of the four Regional Finals, held in February, which consist of oral pleadings before a panel of judges. The 4 teams successful in the semi-final take part in the European Final in April before the judges of the Court of Justice of the European Union.

In 2013-2014 Itsiq Benizri, Céline Estas, Pavlina Hubkova and Andrew Wright represented the EUI, supported by their coaches Barend van Leeuwen and Hubert de Verdelhan. Having successfully submitted written observations in November, the team qualified to participate in a regional final in Braga between the 6th and the 9th of February 2014. After a full day of moots on Friday 7th , the team made it to the semi-final on Saturday 8th (with Geneva, Heidelberg and Maastricht). After some excellent performances on Saturday morning, the team only narrowly missed out on reaching the final, which was won by Maastricht.

The team would like to thank the EUI for its support throughout the competition and hopes that it will keep participating in following years!