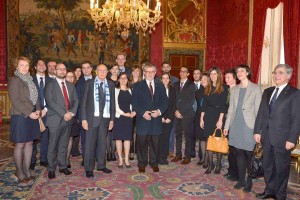 In a memorable meeting at the Palazzo Quirinale in Rome on 24 February, 17 researchers and post-doctoral fellows from the EUI, accompanied by President J.H.H. Weiler and Secretary-General Pasquale Ferrara, were received by the President of the Italian Republic Giorgio Napolitano. Also in attendance was Antonio Zanardi Landi, now Diplomatic Advisor to President Napolitano and former EUI Secretary-General.

The aim of the visit was to personally express the Institute’s thanks to the Italian state for its inestimable support of EUI activities.

The event was a unique opportunity for some of the researchers to present their work to the Italian head of state, who demonstrated sincere interest in the six projects discussed and praised the Institute as a great asset for Europe and for Italy; an institution which he is honoured to host.

Aurélie Andry, a third-year Belgian researcher from the Department of History and Civilization, presented her dissertation project ‘European Social Policy: Influences, actors and debates in the European Parliament 1970s-1980s’. For Aurélie, it was inspiring to present her work to such an eminent figure in Italian and European politics, and she appreciated Napolitano’s comments supporting the mission of the EUI, especially his emphasis on the need to ‘historicise’ the discourse on European integration.

In another presentation, Diego Garzia, Jean Monnet Fellow at the Robert Schuman Centre for Advanced Studies, described the euandi project, an online voting advice application for the 2014 European Parliament elections which, through the use of social media technology, will help connect citizens across the continent according to shared political interests.  euandi’s stated goal to create a genuinely European public sphere seemed to especially resonate with the President, who encouraged this contribution to the Europeanisation of politics and urged Diego to ‘get to the bottom’ of what we can know about the political relationships that bind European citizens together. 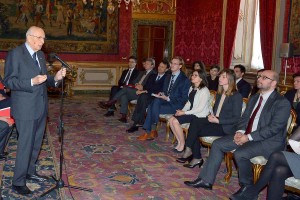 While President Napolitano voiced his concern that the intense focus on recent economic crises has overshadowed the historical, social and civic elements of shared identity in Europe, he expressed his confidence that research carried out in places such as the EUI will lead to a more comprehensive understanding of European integration.  The President also discussed historical moments in Italy’s support for the EU, providing insights based on his personal participation in the events.

Carlo Cantore, an Italian researcher in the Law Department, said he felt deeply honoured to participate in the visit. ‘President Napolitano has dedicated his entire career to strong democratic institutions at the Italian and European levels. It is a privilege to be received by him, and I am grateful to the EUI for giving me this opportunity’.

At the conclusion of the visit, EUI Secretary General Pasquale Ferrara read the hand-lettered pergamena that EUI President J.H.H. Weiler presented to President Napolitano. The message expressed the Institute’s profound gratitude and appreciation for the Italian state’s long-standing support of the EUI.  Italy is one of the original six signatories to the 1972 Convention setting up the European University Institute, and since 1976 the country has provided and maintained magnificent buildings in Fiesole and in Florence for the academic activities of the Institute.