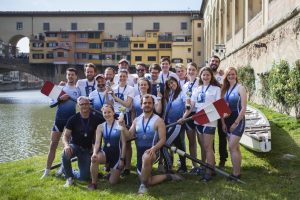 The EUI community turned out in force on Saturday April 13 to support the EUI Rowing Team and their competitors from across Europe as they raced on Florence’s Arno River in the 2019 edition of the De Gasperi Schuman Cup.

A range of rowing clubs came from across Europe to compete, with the support of the EUI community who watched and cheered them on from the boathouse. After a hard afternoon of rowing, EUI triumphed across the board, placing first in four out of eight categories, including every women’s race.

Thanks to everyone who came and supported the team – we’re already excited for next year!

The final results were: