The European Journal of Legal Studies 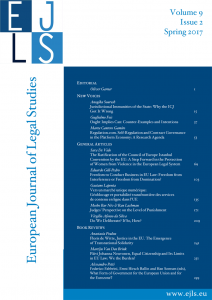 The European Journal of Legal Studies is a Researcher-led peer review journal edited at the EUI’s Department of Law. The open access journal was founded in 2007 and will celebrate its tenth anniversary this year. Although the initiative is supported, both financially and academically by the Department of Law, the identity and content of the journal are uniquely in the hands of EUI Researchers.

According to Editor-in-chief Elias Deutscher, the EJLS has two main goals. The first goal is to provide a platform for young scholars. ‘The EJLS is one of the biggest student initiatives at the EUI, with thirty Researchers involved as reviewers,’ said Elias. ‘The journal provides a lot of opportunities to gain experience,’ he added. Many past editors have moved onto careers in academia after completing their doctoral research. Elias was not surprised. ‘Managing a journal and being able to read an article critically is the most important skill you can have as an academic,’ he said.

The EJLS also aims to be a forum for innovative legal study. The four sections of the journal focus on traditional themes of International Law, EU Law, Comparative Law and Legal Theory. Yet the journal is keen to attract interest from growing disciplines. ‘We have just launched a new call for papers on empirical legal studies, which is part of a social science oriented approach to law,’ Elias explained.  The interdisciplinary approach has encouraged cross-departmental involvement at the EUI. ‘We are now collaborating with more SPS researchers, to combine their methodological expertise with our legal expertise,’ said Elias. ‘It is a very innovative field,’ he added.

The project is just one of the new decisions taken at the editorial level in the past year. ‘We have been working to expand the journal and make it more visible,’ said Raphaële Xenidis, one of the Managing Editors. The journal is now registered on a number of databases, meaning its reach has greatly increased. ‘The result of that is that we attract more submissions, ’said Raphaële. ‘It comes in waves,’ added her colleague Birte Annika Böök, ‘but the commitment for our editors has also definitely bigger, particularly over the past year,’ she said. ‘Their work is the crucial to the journal’s success,’ Elias confirmed.

Despite the editorial team being solely based at the EUI in Florence, the EJLS has an international outlook. The journal receives submissions from all over the world, including the USA and Latin America. ‘The majority of our articles are in English, which shows us how English is really becoming the lingua franca of academia,’ noted Elias. Yet the journal is proud of its language diversity commitment. ‘We will publish in every European language we have reviewers for,’ said Raphaële.

Despite the success of recent years, the editorial team recognize they are not yet part of the ‘Champion’s League’ of academic law journals. ‘We can learn a lot from journals like EJIL and ICON,’ said Elias. ‘We would certainly aspire to be as well known,’ he added. Yet, as a Researcher-run initiative, the EJLS also has a unique purpose. ‘The journal is a platform for newcomers in academia. We hope its success in this niche will continue,’ Birte said.

The EJLS will hold a conference in the late autumn of 2017 to mark its tenth anniversary. To combine this event with the commemoration of the Treaty of Rome, young scholars will be invited to reflect on sixty years of European integration.

The latest issue of the European Journal of Legal Studies is out now.