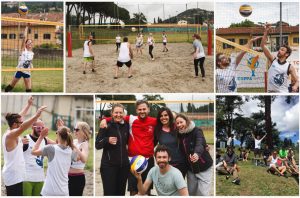 24 teams from across the EUI flew like herons in the first annual edition of the Coppa Airone beach volleyball tournament, which took place on the 11th-12th of May.

The tournament, organised by the EUI Beach Volley Club, ‘The Herons’, included teams of researchers, staff, visiting fellows, partners and friends, and saw four teams storm to victory in their respective categories.

The tournament kicked off with the qualifying matches on Saturday the 11th, followed by an aperitivo and live music in the garden of the Florentia Sporting Club.

After a hard-fought set of final matches in some miraculously sunny weather on Sunday, Miracle Morning won the women’s 2×2 competition, while The Fratellis took the men’s prize. Lores and Montecarla Airone Puro won the 3×3 and 4×4 contests respectively.

The Herons’ Ilze Plavgo said: “We would like to thank the players, referees, and supporters for their commitment and the excellent team spirit, as well as the EUI administration, particularly 4B, the Academic Service and the Communications Service who supported the Beach Volley Club and the organization of this tournament. The beach volley season has just begun, so join and enjoy!”