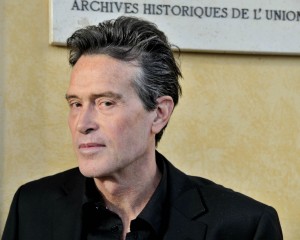 On 1 March 2013, Jean-Marie Palayret retired after many years in charge of a crucial and demanding service at the Historical Archives of the European Union (HAEU).  As archivist and historian – he was associate professor in charge of the history of European integration at the Institut des Hautes Etudes européennes in Strasbourg for 10 years – Jean-Marie was the head of the Historical Archives of the EC and then EU for almost 25 years.

Under his guidance since 1988, the HAEU experienced a significant increase in its institutional and private collections as well as in its relevance to historians, making a visit to the archives at the EUI a must for any research on the history of European integration.

Jean-Marie likes to define himself as an ‘archives hunter’. Through his impetus, and sometimes in opposition to authorities in Brussels, the Historical Archives developed an ambitious acquisitions policy, aiming to gather at the EUI archives from personalities, pressure groups and organisations that have played a crucial role in European unification. Thus, the Institute now houses not only the personal papers of Alexandre Marc, Altiero Spinelli, Alcide De Gasperi, Paul-Henri Spaak, Walter Halstein, but also those of the European Space Agency, the OECD and the Western European Union.  Among the treasures made available to research, the HAEU also adds the largest collection of documents deposited by European federalist movements and a European Oral history collection made of 800 interviews from European actors.

At the inter-institutional level, with the constant assistance of the successive presidents and secretary generals of the EUI, Jean-Marie ensured the stabilisation and consolidation of the EUI’s relationship with depositing institutions. After successfully negotiating a new Framework Partnership Agreement in November 2011 with the European Institutions, which places the HAEU on solid financial footing for the years to come, he played a crucial role in the revision of Council Regulation 354/83 on Archives. The amended Regulation will make mandatory for EU Institutions to deposit their public documents at the EUI and envisages that the institutions and the EUI should make the historical archives available to the public in digitised and digital form, so as to facilitate their consultation on the internet. This is a new and important objective for the future of the Archives, which has the full support of the EUI.

Jean-Marie’s endeavours in developing and expanding the HAEU culminated in last November’s relocation of the archives to their new premises, Villa Salviati. The transfer has brought the service to a state of the art level of infrastructural development.

While aware of the progress still to be made in the areas of the archives’ visibility and its full integration into the academic activities of the EUI, Jean-Marie leaves his duties with a great feeling of accomplishment. The hand-over of the archives to Jean-Marie’s successor, Dieter Schlenker, was facilitated by a two-month transition period in which both were present at Villa Salviati.  Jean-Marie is confident that, with new management, the Historical Archives of the EU will grow with renewed vigour.