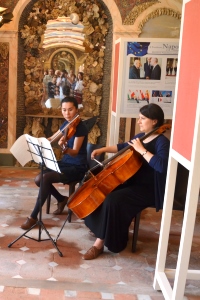 The Historical Archives of the European Union at Villa Salviati was opened to the public on the 10th May to exhibit the ‘Europe of Presidents – The Italian Republic and European Integration (1948 – 2014 exhibition)’.

The exhibition was produced by the Università degli Studi della Tuscia and the Centro Studi sull’Europa Mediterranea (CSSEM) and marked Italy’s political contributions to the history of the European Union.

Visitors were also treated to guided tours of the historic Villa and music from the European University Institute Music Society and the Scuola di Musica di Fiesole.  In addition, a number of childrens’ activities were held throughout the day.

The open day might be over but the gardens of Villa Salviati are playing host to the sculptures of Paolo Stacciolo, which were put on display as part of the exhibition.

Photographic coverage of the event may be found here.