The Historical Archives of the European Union (photo by Tognarini)

The Historical Archives of the European Union hosted an open day on 10 May, as part of Florence’s Festival of Europe.

The day was opened with an inaugural address by MEP Carlo Casini and an introductory talk by Professor Mariella Zoppi, author of the volume ‘La Villa, il Giardino, il Paesaggio – Un parco per gli Archivi Europei a Villa Salviati’.  Professor Valdo Spini also said a few words, highlighting the importance of having the HAEU here in the hills of Fiesole.

More than 700 people, including Florentines, tourists, foreign students and EUI members took advantage of the special opening to see the Villa and its gardens.  Tours were led by the staff of the organization ‘Città Nascosta’. 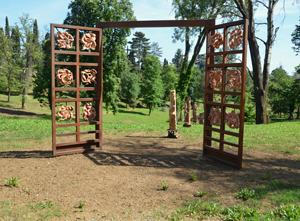 The day was brought to a close with the inauguration of the sculpture by Antonio Crivelli, ‘Il Portale del Tempo’, with the participation of the Secretary General of the European University, Pasquale Ferrara.  The door, with twelve panels in terracotta representing the various steps in the Sophocles tragedy, ‘Oedipus the King’, serves as a place of remembrance, ‘the memory of reason’. This monument, positioned directly in front of the entrance to the Archives, is intended to remind us of the theme of continuous human search for knowledge, a cultural archetype of classic culture which is still integral to modern European thinking.