The History of Science (HoS) working group is one of the most active at the EUI. Now in its third year, the working group has plenty of material to think about this spring, given the impressive series of lectures on the topic developed by Professor of the History of Science Stéphane Van Damme. Already, the series has brought Dagmar Schafer, Antonella Romano and Bruno Latour to the EUI. Before the end of June, the EUI community will have the chance to hear Bert De Munck, Hélene Miallet and Jessica Riskin speak, followed by a forum on Hand Sloane with James Delbourgo and Simon Schaffer. 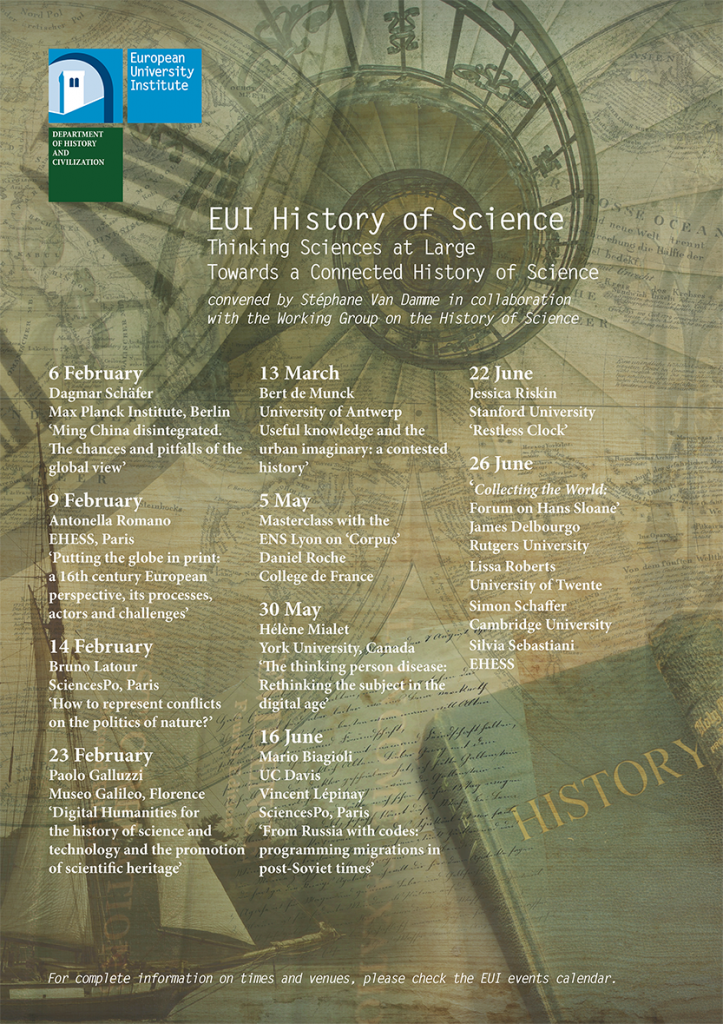 As well as taking part in the high-profile events organised by faculty within the Department,  the HoS group runs a wealth of other activities. The group holds meetings once a month where researchers present a paper, debate a pre-selected topic or discuss readings. These sessions are sometimes jointly held with other working groups, such as those on Intellectual History or Cities.

Between one and three times a year the group organizes workshops: informal sessions linked to thesis topics. This provides a space for invited speakers to deliver talks and for researchers to informally present and get feedback on their dissertation research. ‘It brings researchers together and stimulates discussion around topics that we can all contribute to from our different chronological and geographical areas of specialism,’ Catherine Gibson, one of the group coordinators explained. ‘A good example was the workshop I organised last November with Déborah Dubald, on the theme of ‘Lists’. By looking at a particular type of source that many of us use, we were able to bring 19th-century century French museum inventories and Russian ethnographic data tables and map legends together into a meaningful dialogue,’ she said.

The group also holds BYOC (Bring Your Own Coffee) events; informal sessions consisting mainly in a discussion between an historian and the researchers. ‘I think that the most important thing in such a working group is to create a welcoming intellectual context  for researchers, where the dynamic is different from the seminars,’ said Martin Vailly, another group coordinator.

Last but not least, the HoS working group makes great effort to link the university with the local intellectual context and ‘put the EUI on the map’ of the wider History of Science community. Thanks to former HoS working group coordinator Déborah Dubald, the group now has well established links with the Museo Galileo – Institute for History of Science, and regularly visits the Florentine libraries and archives.

Despite the many events organized by the working group, there are rewards, says Catherine. ‘Being involved in the running of a working group is also a great way to gain experience of organising sessions and small workshops in the informal and friendly atmosphere within EUI,’ she told EUI Life.

According to Martin, one of the best elements is that lectures, workshops, or their blog, the working group is there to serve the researchers. ‘As a long-term project, increasingly developing new connections, it is a great collective enterprise which benefits all of us,’ he said. ‘I especially like this idea of having a working group as a toolbox, at the disposal for researchers to develop any project they are interested in.’

Find out more about this working group on their active blog, or on twitter @eui_hos