"I would love to do something like this again" 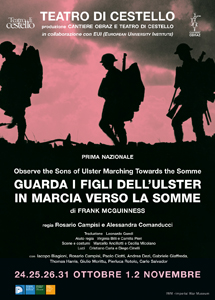 The recent production of ‘Observe the Sons of Ulster Marching Toward the Somme’ hosted by the EUI was “spectacular”, according to organiser and historian Professor Laura Lee Downs.

Speaking to EUI Life, professor Downs said that it was interesting to watch Italian actors perform and interpret an Irish play. “We were able to establish a resonance between the Italian and Irish experience of the war, they were not the central actors but they both saw a lot of bloodshed” she explained, “and yet these two countries both saw domestic consequences for their political life.”

“Italy’s participation in the war was tremendously divisive. The country went into the war divided and came out of it impoverished with a dislocated economy and with widespread social conflict, which would ultimately end in fascism” Professor Downs explained. “And in Ireland as Roy Fosters has said, there would have been no Easter rebellion if had not been for the First World War.”

The play was performed in Florence and was accompanied by a panel of experts chaired by Brigid Laffan, who was keen to see the EUI mark the centenary of the war’s outbreak.

“Sometimes the truth of an experience comes across more clearly in a fictionalised account than it does it history books” said Downs, who as well as being a professor of gender history has also acted in theatrical  productions. The EUI’s department of History and Civilisation was, she said “interested in reaching out more to the arts, to literature and other institutions in Florence.” Before adding “I would love to do something like this again.”