The EUI community mourns the passing of Professor Domenico Mario Nuti on 22 December 2020.

Professor Nuti was a faculty member in the EUI Economics Department from 1982 to 1990. During his career, he was also a Fellow  and Lecturer at King’s College, Cambridge (1965-79); Professor and Director of the Centre for Russian and East European Studies, University of Birmingham (1980-82); visiting professor at the London Business School (1993-2005), and Professor of Comparative Economic Systems  at the Faculty of Economics, University of Rome “La Sapienza” (1993-2010),  thereafter Emeritus professor.

Professor Nuti, with his strong expertise on east European economies, also served as Economic Advisor on central eastern Europe to the European Commission, DG-II, Brussels (1990-93),  to the Polish government (1994-95 and 2002-03), to the World Bank and other international organisations.

A Festschrift in his honour, Transition and Beyond, was prepared by his former students and colleagues in 2007 (edited by Estrin, Kolodko and Uvalic, Palgrave Macmillan). As summarized by one of the co-editors of the volume, an EUI alumna who worked with Professor Nuti, Professor Milica Uvalic: 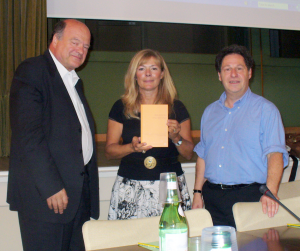 Mario contributed to many areas of economics, including the Cambridge capital theory controversy, socialist economies, comparative economic systems, economics of participation, transition to market economy, macroeconomic policy in Italy and the European Union, and most recently, realisable utopias.

He taught his students to be critical, rigorous, thorough, substantiating every sentence we wrote, where his own numerous papers served as the best example to follow. He transmitted to us the passion for research. He was never satisfied with simple explanations but pushed us to search further. He was not always an easy interlocutor, especially regarding issues about which he had strong beliefs, but he would always encourage us to prove our points by offering additional arguments. He had a sharp eye: in addition to the more substantive issues, he would notice every typo or comma out of place! As an alert observer of current economic and political affairs, in Italy and worldwide, his papers and commentaries (on his blog, active until late 2018) were a great source of inspiration. We have been privileged to have had Mario as supervisor, since he taught us much more than just  economics. He was extremely generous with his time, his commitment to teaching and research, his care for students and younger colleagues.

Prof. Nuti has taught his students that no theoretical paradigm in economics should be accepted a priori, but ought to be used depending on the problem we are trying to solve. This was in line with his own approach, strongly influenced by some of his professors. He once wrote: “I am not fond of labels; like all aggregates they destroy information and are potentially misleading. If pressed, I would choose a handful of them. I would call myself a keynesian-kaleckian-kaldorian-robinsonian when modeling the macroeconomics of the capitalist economy; a “left-wing monetarist”… when modelling the macroeconomics of the socialist economy; a consumer of Marxian techniques when studying the dynamics of economic institutions and systems … a neo-classical in microeconomics … What approach is best depends on the question you ask (Oskar Lange); you choose a model as you would choose a map, according to the nature of your journey (Joan Robinson)” (Dictionary of Dissenting Economists, Elgar Publishing, London 1991).

Mario has  left behind much more than his valuable scientific contributions. He was an intellectual of a special kind, with a critical mind and great knowledge in many fields that extend far beyond economics. He remained consistent in his views until his very last days.

The EUI expresses its deepest condolences to Professor Nuti’s family.