Inside the AEL’s celebrated summer school 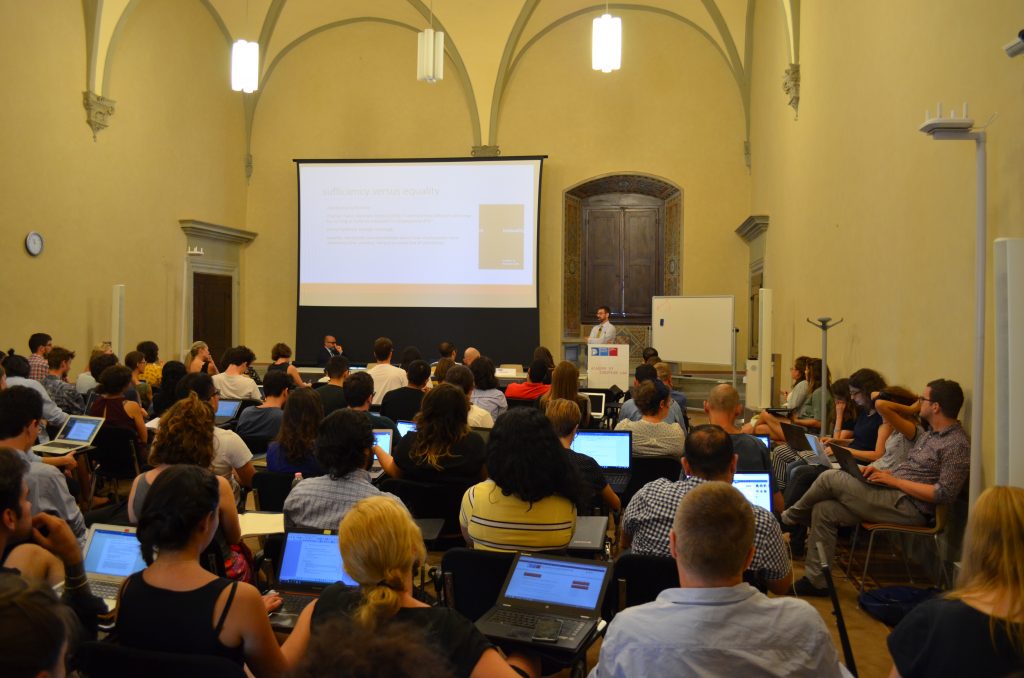 The cafeteria may be a bit quieter, and the coffee line at the bar a bit shorter, but just because it’s July doesn’t mean that the European University Institute has ceased to be a hive of academic activity. Each summer, as the sun starts to show its teeth and the morning bike ride up to the Badia becomes increasingly unpleasant, many of the Institute’s enterprising cohort of researchers leave Florence behind. In their stead arrives a host of similarly enthusiastic young academics and practitioners, ready and willing to kick off summer school season across the EUI’s various villas.

One such summer school is run by the Academy of European Law (AEL), which has been sharpening the minds of aspiring lawyers over at Villa Salviati since 1991. The AEL hosts two courses, each spanning the best part of two weeks, throughout June and July. The second, ‘The Law of the European Union’, is currently in full-swing, with a number of notable speakers on the roster (the Distinguished Lecture will be given by Princeton’s Professor Kim Scheppele, an expert on Eastern European politics and law, who spoke to EUI Times earlier this year).

Prof. Nehal Bhuta – Co-Director of the AEL – says that the Academy wants all participants to experience ‘a really rigorous critical engagement with some of the leading thinkers on the place of human rights today in addressing inequality and the deepening problems of distributive justice,’ he told EUI Times. ‘We hope that the practitioners and emerging scholars attending our summer school have had a chance to gain an understanding of where the debate is at, so that they can take it forward.’

Yet for many, both participants and organisers agree, the most valuable and rewarding part of the process were the opportunities to network and make connections, both personal and professional, with like-minded academics and practitioners from across the world. Outside the academic timetable, the AEL organises social events for its summer schoolers, like tours of the city and rooftop drinks overlooking the Florentine skyline at sunset.

Joe, a student from Glasgow soon to embark on a training contract with a London-based law firm, noted that while the ‘diversity’ of the lectures was brilliant, the highlight of the summer school had been the connections he had made along the way. Anna, a trainee judge at the Court of Appeals Stockholm agreed that she had found ‘talking to other participants’ and finding out about their backgrounds most rewarding.

The human rights portion of this year’s school finished with a lecture by Yale’s Samuel Moyn – author of a recently-published book entitled ‘Not Enough: Human Rights in an Unequal World’. Moyn argues that the international human rights movement have been subject to a neoliberal dogma; by not spending enough time and energy seeking to address inequality and the politics of fairness, he believes, politicians and NGOs have missed a trick.

Speaking to EUI Times after his lecture, Moyn said that society as a whole had erred in ‘privileging’ groups like Human Rights Watch and Amnesty International in the human rights movement, ‘relative to other causes and groups’. While acknowledging that heavy-hitters like Amnesty had succeeded in enabling ‘transnational action’ on human rights atrocities, Moyn argues that ‘they excluded economic and egalitarian’ issues.

However, Moyn believes that we should not be putting all our faith at the feet of large-scale NGOs to right the human rights movement’s supposed wrongs. ‘The organisations that used to concern themselves with human rights were trade unions, socialist parties and the post-colonial states at a global level – human rights groups aren’t like any of those.’

Instead, others should seek to ‘supplement’ the big organisations with a renewed focus on inequality, something Moyn says the likes of HRW and Amnesty are waking up to, albeit slowly. ‘Having something at five minutes to midnight is better than not having it at all,’ he adds wistfully.

The human rights movement today is not fit for purpose, Samuel Moyn argues.

So how could a renewed focus on economic inequality help address global human rights atrocities? ‘We have to think why violations happen,’ Moyn reasons. ‘People elect bad leaders – that has a lot to do with inequality.’ Unless organisations make a concerted effort to consider the drivers of human rights violation, Moyn argues, they will make little headway, and will continue to treat symptoms rather than causes.

Asked what he would do, given a blank canvas, to try and resurrect a human rights movement he sees as broken, Moyn was unequivocal: ‘more democracy’. The creation of a ‘global democracy’ would be ‘a very interesting scenario,’ he continued. ‘The world’s rich have found ways to circumvent the people. We need to subject the rich to the processes by which outcomes are reached, and make sure they care about those outcomes.’

Moyn’s challenging lecture capped off a memorable fortnight for the AEL’s summer school participants, and food for thought as they collected their certificates in Villa Salviati’s grottos. With a similarly stimulating lineup of speakers and activities planned for the second of their two courses, which is still ongoing, it is no wonder that aspiring academics and practitioners continue to flock back to Florence year after year.