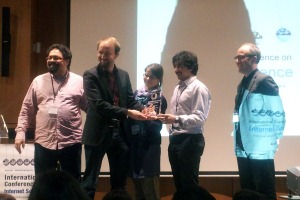 Two EUI academics have won the best student paper award at the first International Conference on Internet Science, held in Brussels from 9 to 11 April.

Andrea Calderaro, a research assistant at the Centre for Media Pluralism and Media Freedom (CMPF), part of the Robert Schuman Centre for Advanced Studies, wrote the paper with Ben Wagner , a third year EUI researcher, and Kirsten Gollatz, a project manager at the Humboldt Institute for Internet & Society.

The ‘Common narrative – divergent agendas: the internet and human rights in foreign policy’ paper was presented at the conference in Brussels.

The conference was organised by the Network of Excellence in Internet Science (EINS), part of the European Commission’s Seventh Framework Programme.