An Interview with the EUI Refugee Initiative 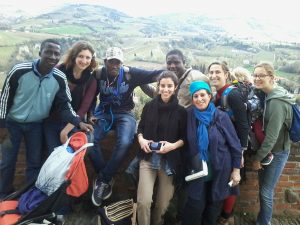 EUI Refugee Initiative volunteers and guests on an outing

In September Antonio Silvio Calo received one of Italy’s four Premio Cittadino awards in a ceremony at the HAEU at EUI’s Villa Salviati. Silvio Calo, a high school teacher from Treviso, received the award in recognition of his contribution to the lives of refugees, hosting six asylum seekers in his own home and creating a training and integration programme in partnership with his local community.

To celebrate the recognition of volunteering efforts for asylum seekers, EUI Life looked closer to home at the EUI’s Refugee Initiative. Since the foundation of the Refugee Initiative in 2016, 13 asylum seekers originally from Sub-Saharan Africa have passed through EUI, receiving housing, language lessons, and other opportunities, as well as participating in and contributing to EUI’s diverse community. Caterina Guidi and Eleonora Milazzo, two of the Initiative’s volunteers, sat down with EUI Life to discuss what the Initiative has achieved so far, and where it might go in the future.

Where did the idea for a refugee initiative come from, and how did the partnership with Caritas come about? Guidi tells me: “In October 2015, three EUI Italian language teachers decided to open EUI’s language facilities to a class of asylum seekers. Given the enthusiasm of the community and the moment of the humanitarian crisis, there was the will to do something more, and some people here began to propose the hosting programme in partnership with Caritas”.

The rest is history – since the establishment of the relationship with the Catholic NGO Caritas,  the Refugee Initiative has hosted 13 asylum seekers – referred to as guests – with seven of these having ‘graduated’ from EUI to the next stage of the recognition of international protection. Of these seven, Guidi tells me, three lead self-sufficient lives and careers in Florence in sectors such as hospitality, consumer goods and administration. One of the former guests even undertook a traineeship at EUI, working in the library.

What, then, does the EUI’s Initiative offer the guests that conventional asylum centres don’t? Milazzo answers: “EUI, as an international institution, has a lot to offer in terms of reception but also in terms of integration. The idea behind the initiative is that without really having to do much more than we do in our everyday working life here, we are able to help guests find their way around or feel more comfortable.” 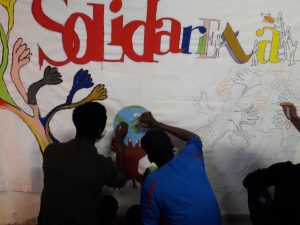 She tells me that the guests, as well as living in the EUI apartments, have the opportunity to study, do extra-curriculars, and participate in social events with other members of the EUI community. The Refugee Initiative also offers support with often lengthy and bureaucratic international protection applications, and gives career guidance to guests, in partnership with Caritas. The guests remain under the legal protection and responsibility of Caritas, but are housed at EUI.

“We have the long-term ambition to lift up new European citizens and to lift ourselves up as European citizens”, Guidi adds. “We work as a map, helping people orientate themselves. To give them a chance to integrate in our society, for those who want to integrate. Guests are treated with the status of PhD researchers and they are treated as equals. They get a free lunch, access to the library, the gym, the facilities, and language classes, as well as to the Institut Francais in Florence, as many of them are native French speakers.”

The demanding nature of the programme requires the selection to be based on the guests’ integration path, and their willingness to make the most of opportunities: “Not everybody is ready – it’s a demanding programme, we push them to be part of the community, to be involved in different activities”, Guidi says. “Also, it’s very rare to find a centre of first reception based in apartments. Our guests act as the owners of the apartments, so they need some independence and knowledge already.”

The intensity of the programme has yielded success in the opportunities available to former guests. Where do the volunteers see their project going in the future?  “We created something completely new, that didn’t exist before”, Guidi tells me. “We have had the opportunity to present this initiative in different venues – we’ve been invited by other universities and by Caritas to show this example to other Caritas branches in Austria or Germany or Greece, and we are honoured to show what is going on. Although it’s a very small project, imagine what would happen if everyone did it. Every institution can do it.”

“It’s an initiative that can be replicated in similar places”, Milazzo adds. “The idea and the wish is that other institutions in the public and private sector may take on a similar initiative, where they can share part of their everyday working life with people who are seeking closer contact with the local reality.”

You can read more about the EUI Refugee Initiative on their blog.