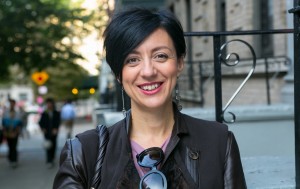 What are you ambitions for the EUI Alumni Association?

We view that the EUI and its Alumni Association (AA) have both come a long way; we have now reached a point where we can tap further into the great potential of what the EUI has become and of its greatest asset, its people. Our vision is that the AA can become a wide, strong, inclusive community that supports its members and functions as the backbone of the reputation of both the EUI and each of its alumni. We believe the time has arrived for the AA to become the sort of association that can support professionals and academics in their life after the university in practical, real and tangible ways, similar to what happens with the AAs of other European and international prestigious universities.

What makes you a good candidate for the position?

As you know, there are five of us running jointly for the AA. If you look at the short bios that we have included in our joint manifesto you will see that we represent a mix of alumni from different departments of the EUI, different nationalities and backgrounds and with a variety of professional experiences following our graduation. These include the academia, private practice, the third sector and the EU. All of that renders us capable not only to relate to the needs and hopes of a large part of the EUI alumni. It also means that we can apply our hands-on professional experience to the ‘project’ that is the EUI Alumni Association. Finally, we would like to point that we have been actively involved in EUI’s community in the past as representatives while studying but also following our graduation – in fact one of our team members is giving a presentation at this year’s Alumni events.

How do you differ from the other candidates in your vision?

We note that we share some of our ideas with the other candidates, which is encouraging for the future of the EUI AA, as it suggests we could all work together to bring some useful ideas to life, irrespective of whether we do that from the position of the Executive Committee or from the ranks of the AA membership.

Within that broader commonality in hopes and aspirations, our team’s joint proposal stands out, in our view, as it provides more practical anchors, and a more realistic footing for achieving some of the shared longer-term objectives. Thus, for example, in order to ultimately increase and strengthen the AA membership and develop its influence academically and business-wise, we make the concrete proposal of seeking to move to a free membership of the AA, that is automatic upon graduation, unless an opt out is chosen. This will mean more EUI graduates are part of the AA and will increase the visibility and outreach of the existing AA resources (such as the database, or the local chapters, or other EUI and AA activities). These practical ways of strengthening the day –to-day interaction of alumni among themselves and with the EUI can eventually also allow for the achievement of the longer-term objectives of recognition of excellence (e.g. by enabling easier access of the EUI to a pool of experts for any potential projects, which would also benefit professionally the alumni). And we anchor our plans for wider recognition of excellence by the EUI to the proposal to collaborate with external partners (e.g. by establishing common consortia for projects, joint research and educational activities.

If you are seeking to move towards free membership then how do you plan to fund the AA?

During the formative years of the AA, some financial basis for its operation had to be ensured via AA membership fees; we now view that the time has come for the AA to be functioning and to be funded based on the services it offers.

Thus we could contemplate the potential of offering some services automatically with the AA membership, and another category of services, to be offered upon request and on a paid basis. We contemplate that the latter would include mainly participation to AA events, activities and/or other projects of interest to the AA members. Based on voices we have been hearing from some of our fellow alumni, we could also explore the desirability (by the wider AA membership) and the practicality and feasibility (with the EUI and more generally) of offering some other services upon payment, too. These could include the EUI e-mail address, given that those alumni interested in having it are currently already paying for it via the AA membership fees; or e-access to the EUI library, which seems to be of great interest to alumni but could potentially require more expensive licences etc.

In this manner, we can envisage an AA that is more pro-active in seeking to organise events which are more relevant for its alumni while at the same time allowing those not interested in these events or not able to attend them to nevertheless remain in contact with, be informed about and always feel and be part of the EUI and AA family.

What to you, is the most important function of the Alumni Association?

We view that the main function of the AA is to serve its members, and that it can do that in two ways: directly, by offering services and support to the alumni and alumnae, and indirectly by contributing to the EUI’s reputation-buidling. Strong alumni make a strong EUI and vice versa.

The EUI AA Executive Committee consists of five members (President, Vice President, Secretary, Treasurer, and Member), who are elected by the General Assembly and serve for a period of two years.

Elections will take place this year on 26 September during the Alumni Weekend and the Annual General Assembly in Florence. For those who cannot attend an online voting facility has been set up. Online elections will take place 12-22nd of September: An email containing a link to the voting facility will be sent to all AA members’ EUI email accounts.