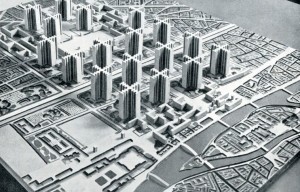 From the novels of Elena Ferrante and Charles Dickens, to policy debates on ‘green cities’, the urban environment increasingly dominates our collective consciousness.

Feeding into all academic disciplines, the urban space is often considered a lens through which wider processes and struggles can be analysed.  Perennially a site of contestation, the city represents a unique arena to explore the articulation of ideas and movements.

With this in mind, History and Civilisation PhD researcher Nick Mithen has formed a new interdisciplinary working group on cities. The group meets twice a month and includes presentations from participants. He tells EUI Life, ‘’Starting with the city, rather than a regional, national, transnational or – dare I say it – ‘global’ scale of analysis can help reframe many of the fundamental questions which historians, sociologists and political scientists ask. It helps us understand how different scales and different dimensions of social life exist alongside, and are layered upon one another.’’

Mithen hopes the group will foster understanding of what ‘urban’, in all its variety, means. He explains, “Our sessions thus far have asked fundamental questions problematizing what we mean when we talk about the urban, how we should conceptualise and approach the city. We have also asked questions about how urban morphology and the built environment can be understand as a refraction of the city’s social life.’’

He adds, “The aim is to draw upon both classical and much more recent theoretical literature from the social sciences, and read it in dialogue with specific case studies, often historical. Other themes we plan to discuss are how memory, heritage and nostalgia operate within the urban space and the dichotomy between the city and nature.”

At its core, Mithen hopes the working group will capture the energy and dynamism both of theoretical conceptualisations of the city, but also the lived experience of urban life beyond this. ’Hopefully it will function as an intellectual haven within the university but somehow removed from the trappings of conventional academia.’’, he asserts.

For information on the working group, email [email protected]

You can read the EUI Times feature on Cities, including an interview with Nick Mithen and Prof. Stéphane Van Damme here: https://times.eui.eu/the-right-to-the-city-urban-space-today.html