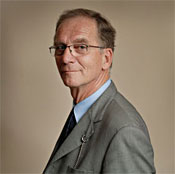 The Institute was sad to learn of the passing of one of its former professors, Jaap Dronkers, who died on 30 March.

Professor Jaap Dronkers worked in the Political and Social Sciences Department from 2001 to 2009. He was a quantitative sociologist who specialised and published widely in the areas of education and social inequality. He supervised dozens of doctoral theses over his career, many of them at the EUI.

The EUI expresses its deep condolences to Prof. Dronker’s wife Antonia and to his children, and its solidarity with them at this painful time.