On March 11 2014 a unique encounter took place between four EUI researchers, native Spanish speakers all, and a group of  Florentine middle-schoolers in their third year of study.  The meeting took place at the Istituto Comprensivo Statale “Botticelli”. 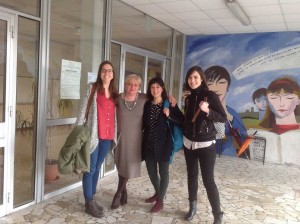 Who were the students involved?

The students at the Botticelli  are 13 or 14 year old kids who have been following a curriculum that includes both  Spanish and English.  They are all in their third and final year of middle school.  From the EUI side, four researchers volunteered to go: Francisco Rodriguez, Irene Palacios, Macarena Ares Abalde, and Maria Ramos.

Why were EUI researchers invited to the school?

The idea was to give the middle school students the chance to hear and practice Spanish with native speakers, while at the same time introducing them to the European University Institute and describing the work that goes on here, from a researcher’s point of view.

How did the Language Centre come up with the idea?

Alba Forzoni, one of our Italian instructors, also teaches Spanish at the Botticelli.  It was her idea to ‘borrow’ some of her students from the EUI so that her Italian pupils could practice their Spanish with mother-tongue speakers.  We in the Italian Unit thought it was a great idea and took care of the bureacratic arrangements necessary so that our researchers could visit the school.

What did the researchers talk about?

The students had prepared a list of questions beforehand, in Spanish, and took turns asking them.  EUI researcher Francisco Rodriguez explained the meaning of social science, illustrating it with examples from the  course material that the younger students are already familiar with, such History.  Irene Palacios spoke about the concept of democracy,  Macarena Ares Abalde  addressed their questions on elections, and  Maria Ramos discussed the connection between education and employment opportunities.

Was the visit a success?

Some of the questions elicited very heart-felt and profound replies, which sincerely fascinated the Botticelli students.  Despite the language differences and the age differences, and not a little bit of self-consciousness in expressing themselves, it was remarkable how they were all genuinely interested in what our researchers had to say.  They were especially intrigued by the conviction with which Irene spoke about her research, that someone could be so interested in a topic that they would forgo weekends and spend hours on end working in the library.

The group also talked about Spain and Argentina, about food, and about the differences between those countries and Italy.  It was an excellent opportunity for intercultural exchange.  Hopefully we’ll be able to repeat it soon.