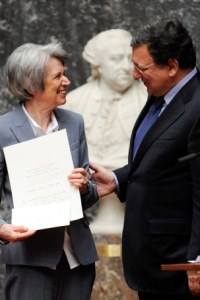 Professor Luisa Passerini has been presented with the All European Academies Madame de Staël Prize for Cultural Values by European Commission President, José Manuel Barroso at a ceremony in Brussels.

Professor Passerini is head of the Bodies Across Borders project and is a part time professor in the Department of History and Civilization.

At the ceremony she was described as “a historian who has proved in her scholarly works that Europe can be better understood from its margins and from the outside than from what is considered its centre.”