Mirna D. Goransky has been awarded the 2013 M.C. Bassiouni Justice Award in a ceremony at the EUI. 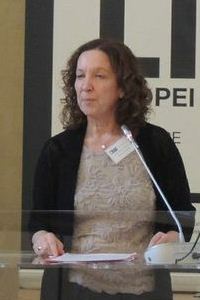 Mrs Goransky was given the award in recognition of her skill and courage in prosecuting those responsible for crimes committed during Argentina’s “Dirty War” during which the country’s government suppressed political dissidents.  The award also acknowledges the difficulties she faced as a female prosecutor in a “society of rampant machismo”.

Currently the Deputy General Prosecutor of the Office of the National Attorney General in Argentina serving as Prosecutor of the Special Unit to Investigate Human Rights Crimes during the 1976-83 Dictatorship, Mrs. Goransky was previously Prosecutor of the first-ever decentralised prosecutor’s office in the City of Buenos Aires in 1999, and authored the book “Hacia un Ministerio Público eficaz, eficiente y democrático.”

The award aims to recognise outstanding service in the field of core international crimes, with the recipient recieving a cheque and a portrait. This is the second time it has been awarded.