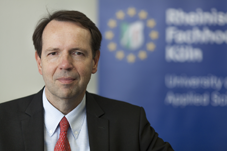 Congratulations to EUI SPS alumnus Martin Wortmann, who was appointed President of the Rheinische Fachhochschule (RFH) in Cologne, this September. Also known as the University of Applied Sciences – Cologne, the RFH has around 5600 enrolled students and offers undergraduate degrees and masters courses.

Since defending his thesis on political marketing at the EUI in 1989, Martin has developed a career working in both academia and the public/private sectors  in the areas of business administration, technology and innovation, communications and management.  His most recent posts include Professor at the University of Applied Science, FHM, Bielefeld and Director of the Institute of Technology and Management (ITM) in Pulheim.

Martin is married to EUI alumna Luciana Stortoni (SPS 1992) and they have three children.