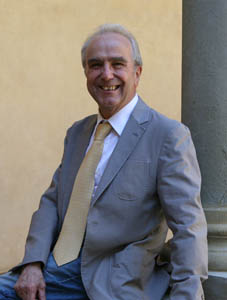 Massimo Bensi retired on 1 June, after more than 36 years of service to the Institute. Massimo arrived in 1976, when his first job was sorting and cataloguing books and periodicals for the EUI’s nascent library, then located in the refrettorio and the sala della Colonna.  After about a year, he moved to the Centro di Calcolo, where he initially had a hand in managing the EUI’s sole computer, an enormous machine which handled library and administrative data. His work in the computing service subsequently included purchasing, payments, and inventory – the latter of which has followed him across the other services in which he has worked ever since, including Financial Services and what is now the Real Estate and Facilities Service.

Massimo looks back with satisfaction over his career at the Institute. He relates that, since 1976, ‘the EUI has made giant steps to arrive where it is today, thanks to the many people who have contributed and who will continue to contribute to its functioning in the years to come.  As a leading university, the EUI attracts a growing number of professors and researchers, and it is an important institution for both Florence and Italy’.

Among the many colleagues for whom he has warm regard, he expresses special appreciation for Cristina Gennarini, with whom he has worked side-by-side for more than fifteen years.

With his retirement, he is happy to devote more time to his grandchildren, and also has begun to lend a hand in his son’s legal office.  He also will be able to dedicate more attention to the charitable project ‘Sara, por los ninos’,  which provides after-school care and a snack each day to more than 120 children in Peru and 80 children in Brazil.  The project was created by the Bensi family 12 years ago in memory of their daughter Sara, a young poet who had dreamed of helping children in South America.

The EUI will hold a farewell party for Massimo on 19 June.  We wish him all the best in his future endeavours!